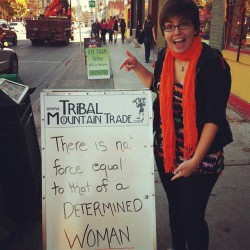 On Valentine’s Day, groups of women around the globe will rally and dance to draw awareness to violence against women.

One Billion Rising is the movement that reflects the United Nations’ estimate that one billion women worldwide will experience violence in their lifetime. During the Thursday event, women will host drum circles, spoken word presentations, banner and sign-making, as well as dance in choreographed routines.

“We don’t necessarily have expectations,” said Jess Kiley, who is organizing the event at Western University, “but we hope that this event will be a wonderful way for the community to come together and dance and show our solidarity and commitment to ending gender-based violence.”

Participants from Western will march from the University Community Centre to join up with other groups at Citi Plaza, just outside the London Central Library, where community members will dance and sign banners to commemorate the occasion from 4 to 6 p.m.

The focus of the One Billion Rising Canada campaign is missing and murdered Indigenous women in Canada and the events in London will reflect that, Kiley added.

Kiley has also been working with various community organizations for off-campus events.

At^lohsa Native Healing Family Services is one of the event’s community partners. It has planned a walk at 3 p.m. from its office on Richmond Street to Citi Plaza to raise awareness of the alarmingly high rates of violence against Aboriginal women in Canada, Kiley said.

The New School of Colour – an organization that provides opportunities to youth and adults dealing with issues of poverty, mental health and other social barriers – is another of the One Billion Rising community partners.

The discussion the event will generate in the public sphere will foster new ideas in people’s minds that can be used to bring the world closer to eradicating violence against women altogether, he said.

“The word is getting out for people to come out and participate and the youth are invited to say a few things,” Jeresky said. “It’s all dance and drawing and spoken word. It’s togetherness.”

Augusta Aguinede, a victim of domestic abuse herself, moved to Canada in 2011. She is the founder of the Centre for Women and Youth Development in Calgary, Alta. The organization is not-for-profit and campaigns against violence against women in Aguinede’s native Nigeria and other West African countries.

“The events of the One Billion Rising campaign will go a long way to making our campaign against all forms of violence against women easier,” Aguinede said. “Because the events are not only taking place in Canada, rural women in places like Africa will know that there are people who care about their well-being.”

The events would help empower women as well as make men all over the world see the danger of violence against women, Aguinede added.

One Billion Rising is organized worldwide by V-Day, a global activist movement to end violence against women and girls. Each year, the organization raises funds for groups who are addressing gender violence by focusing widespread media attention on it.