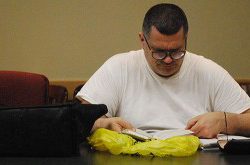 Harry Kuhn has a voice that sings even when it’s not singing – a low, rumbling baritone that cuts the air like a scalpel and echoes through it like a diesel engine.

He uses this voice sparingly, edging into group discussions with jabs and jokes and one-liners, but no Hamlet-like soliloquies.

But when Harry cuts in, especially if it’s to read aloud something he’s written, he has a way of quieting everything and everyone around him. It’s partly because that voice is musical and low and arresting, and partly because he uses it to hit so many of the right notes.

Several combat-clothed men with rifles were spread across the roadway, about 70 yards in front of me. They and I and the mounted machine guns on the Jeeps at our roadblock opened fire simultaneously.

Harry read this memoir about his days in the military reserves one Saturday at Grit Uplifted, a writing group for homeless people, those at risk of being homeless and those who have experienced homelessness in the past.

Harry, 57, is not homeless now but spent about a month on the street in Toronto many years ago, working as a security guard who couldn’t afford his own place. His story is similar to those of other group members, who meet once a week at the central branch of the London Public Library to connect in conversation and critique each other’s work. 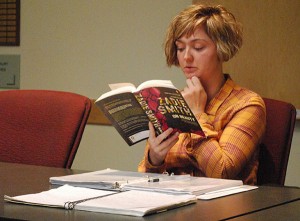 Grit Uplifted was created in 2009 to encourage self-expression among writers and to build trust and community, founder Kelly McConnell said in an interview.

Writers meet at the library on Saturday afternoons for two-hour sessions that begin with the chance to check in and chat about what’s going on in their lives. A facilitator then gives a writing lesson, followed by writing exercises where group members write original work or develop a piece they’ve been creating in their spare time. Then they have the chance to share their work by reading it aloud, and can also comment on the work of others.

“I think this is one of those amazing opportunities for them to have a voice and make people aware of their thoughts, their dreams, their feelings, the experiences that they’ve had,” McConnell said.

“When you start getting rolling to do that, it builds your confidence,” he said.

“It’s a change in attitude. Usually I was hesitant about putting myself forward. Now I’m a little more willing to do that.”

There are times you wonder if Dan Lenart is tuned in to what’s going on around him, or if his mind is fixed on some deeper issue that will spill out of him eventually, when he has absorbed it all and thought it through and turned it into poetry.

He’ll sit in a Grit Uplifted meeting with his shoulders hunched over a notebook, sometimes pinching the bridge of his nose as if lost in thought, sometimes reading a tattered copy of A Handbook to Literature while a facilitator gives her lesson.

The 47-year-old Londoner seems aloof at times, almost disinterested. But that perception dissolves when another writer shares his or her work and waits for feedback.

Dan has a way of listening closely – or doing a great job of faking it – while making you think he’s not listening at all.

And when someone shares a piece of writing that has flowed from the heart and mind, Dan often has something to say about it. 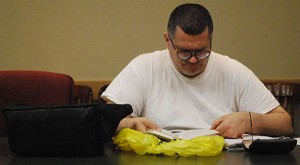 Group member Dan Lenart reads a copy of A Handbook to Literature during a recent Grit Uplifted meeting.
Photo by Ben Forrest.

“Big knock-out punch with that one there,” he said one Saturday, after Grit Uplifted member Colin Nickle delivered a stream-of-consciousness piece written in “street patois.”

Dan quoted phrases from the text that resonated with him and offered another quick compliment: “You get absorbed in the intensity of it,” he said.

Like Harry, Dan has been off the street for years and had only a brief experience of homelessness. It happened when he was 19 years old, after his mother’s second husband beat him up and kicked him out of the house, he said.

He walked the streets of London as the weather got cold, homeless only for a few weeks.“Not long,” he said in an interview. “But long enough to know that I never want to be there again.”

English was one of Dan’s worst subjects in school but he began writing about 10 years ago, “scribbling little notes and things,” he said. Then he started attending a poetry group and began writing full pages of verse.

Words started gushing out of him, and eventually he was reading them aloud at open mic poetry nights.

When he saw a poster for Grit Uplifted about two years ago, Dan knew he had to be part of it.

“I really identify with this population,” he said. “I have a lot in common with them.”

Dan’s poetry is earthy, raw and sometimes political, but also sophisticated and wise. He delivers it with the rhythm and cadence of an old pro, as someone who treats the audience like a friend and isn’t afraid to speak when he has something important to say.

A-type command and control personalities are the macho standard

Some call them the strong, silent type because feelings and emotions are not what Real men display

Until everything comes crashing down

Then something different presents itself, after the mask and the tough guy façade Is ripped off …

Dan has seen the power of Grit Uplifted – of getting to know other people who are in similar situations as him.

Pat Wood rests her head in the palm of her left hand, her eyes downcast and brow furrowed, as if she is haunted by something that makes her more tired than she ought to be.

She is just shy of 67 years old, retired and solemn at times. But what you need to know about Pat is that she’s funny, and her mission in life is to make people laugh.

“That’s about all I can do anymore,” she said in an interview. “If you can’t find the humour in whatever big thing is crushing down on you, you’re going to end up even deeper in the hole.”

Pat grew up in Kent County in southwestern Ontario and experienced homelessness when she was about 40, after the duplex she and her family lived in was sold out from under them in the 1980s, she said.

“I ended up with three kids in a motel room, paying rent for a storage unit,” she added.

“The stuff that couldn’t go into the storage unit was in my mother’s back bedroom. It was not fun.”

Pat never lived on the street but pounded the pavement to find a permanent home, only to have that place sold out from under her, too.

She moved to London, found a job, lost it when her contract wasn’t renewed and collected employment insurance and Ontario Works benefits before retiring at age 65.

Pat’s writing is a mixture of fiction and fact, grounded in her experiences as a mother who struggled with poverty but found ways to not dwell on it. She uses it to make jokes and to rant about issues that affect her directly.

An example, crafted around her take on a politician’s plan for social assistance:

This dolt has not thought his idea through. Even I can figure that homelessness will increase, and/or the crime rate.

Let me explain myself. This idiot – should I really call him this? – says he wants to take money away from anyone who has been on government assistance for too long.

Pat’s philosophy is to write what she knows, and she believes the desire to write something is reason enough to do it.

She is a joker, adept at finding humour in dark things. But she’s not yanking anyone’s chain when it comes to this.

Harry Kuhn  is sitting in a coffee shop in downtown London, thinking about whether he’ll submit anything for the next edition of Grit Uplifted magazine.

This edition, slated for release in spring or summer, will feature winners of a writing contest about poverty and homelessness – not just by Grit Uplifted members, but anyone in the community.

The goal is to expand community dialogue on these issues, and Harry might write something about it.

“And that’s really not pleasant. I mean, I got through it the first time. I don’t need to relive it.”

He might write about other people who’ve had experiences with homelessness, but nothing is certain.

If he comes up with something, you can bet it will hit many of the right notes, that people will read it and take notice and wonder what else he has to say.

Harry has two voices – one that booms from his throat and another that lifts off the page.

Both slice through the air like a scalpel and echo into empty space. Both are lyrical and arresting and colourful and unique.

Both have a way of making you hear music, even if they don’t sing.