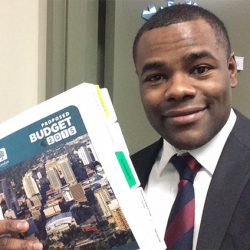 The shortlist for the Top 25 Canadian Immigrant Awards.  Over 650 entries were shortened to 75.

Mohamed Salih, London’s Ward 3 Councillor and selfie enthusiast, is on that list.

Salih noted previous winners of the award such as Donovan Bailey and Michelle Jean and feels honoured to be in the running.

“It’s really humbling,” he said.  “It’s great to be able to know that there’s always opportunities for everyone here in Canada to truly excel.”

Moving to Canada from Sudan 20 years ago was one of Salih’s biggest dreams.  Being somewhere that was safe and having opportunities to achieve his goals came with the territory, he said.

Besides being a city councilor, Salih is also a boarder services officer, another one of his dreams.  Salih has been successful in his work, recently receiving a promotion. He said he’s living out what he’s always wanted to do.

But his path didn’t start so easily.  From trying to integrate into Canadian society, getting through high school, finding jobs, everything was a short step in the right direction.

“I just think every part of my life has been small victories. In the first part of my life I didn’t really have the opportunity to think that far ahead in the future,” Salih said.

Entering politics was a natural way for Salih to participate in the community.

“I saw that there was a need for me to come to politics and try to make that impact in the community and give the representation that I sort of felt wasn’t being represented well,” he said.

Now at 29 years old, and one of the youngest city councilors, he’s wondering what his future will hold.  Salih said he plans to not worry and take life as it comes.

“I don’t want to be too greedy, but I’ll continue to give it my all and see where it takes me.”