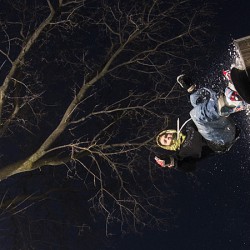 It feels like the beginnings of a heist. We’re sitting outside a museum mid-afternoon, waiting, in a car full of equipment, for bystanders to clear the area.

“People scouted it the night before,” says Alex Kyle in the passenger seat. “But there’s so many variables. Sometimes there’s no security, other times there’s a police car parked at the base. You never know.

“But I already have it all in mind,” he says. “I know exactly what I need to do.”

With that, Kyle, 20, gets out of the car and grabs his snowboard, a shovel and film gear from the trunk. He puts down a camera at the base of a staircase outside the museum, then heads up to the top.

Kyle is self-filming some clips of urban snowboarding, a growing sport in London and other flat, concrete-laden towns and cities across Canada and the northern United States. Instead of simply going downhill, urban snowboarding, sometimes referred to as “snowboard street,” involves boarders seeking out common city features – stairs, handrails, statues, and roofs – and turning them into spots for snowboarding.

This day’s spot is a 30-step staircase outside Museum London, and Kyle intends to jump onto the handrail and slide down it before stopping just short of the street.

“I’ve hit this spot before,” he says. “But I’m going to try a trick that I haven’t gotten yet on camera.”

The trick is risky. Kyle will start at the top of the snow-covered staircase, and slide down the first half before hitting a jump. He’ll land his board perpendicularly onto the flat part of the hand railing, facing forward as he slides. Then Kyle will reverse his board as the railing kinks downwards, with his back towards the landing. There’s always a threat of injury, particularly with this day’s trick, he says.

But that’s only half the risk. Many of the spots are near major roads, so there’s the possibility of getting hit by cars. And if that’s not enough, all of this usually takes place on either private property, or public locations where this kind of activity is frowned upon.

But all of the risks, Kyle says, are the draw of urban snowboarding. Alex Kyle preps before a run in front of an abandoned school, using a picnic bench as his launching point.
Photo by Tucker Wilson.

“Anything that has a small risk factor isn’t really publishable in magazines or on film,” he says. “Something that is easily done by many snowboarders isn’t particularly interesting.”

Kyle’s urban snowboard crew is all about outdoing each other when it comes to danger. They have an online group chat going where riders suggest spots around London, trying to one-up each other as they put together a collection of all their clips into one cohesive film.

Some of those spots include Harris Park, Western University and Sir Frederick Banting Secondary School. The problem with those locations, as is the case with most spots in urban snowboarding, is they’re flat. Without any kind of slope, riders have to find other ways to propel themselves.

One way of doing this is by using a winch.

Popularized in wakeboarding, winches are gas-powered machines with a tow-rope and a large spool of chord. Riders unwind the cord to a certain point, then hold on to the handle. When the boarder is ready, the machine winds the cord back up at an incredible speed, pulling the holder with it until he or she lets go and rides off.

Winches have revolutionized the sport, allowing riders to hit spots that would otherwise be impossible to snowboard. But they’re not commercially available, says Dallas Ianni, manager of London’s Boardshop.

The big reason winches aren’t sold to the public is the potential lawsuits, he says.

“They’re highly, highly dangerous,” Ianni says. “They’re the best to use for snowboard street. But a winch can shoot you up to 80 kilometres per hour. It can yank your arm out of its socket if you didn’t know how to use it.”

Instead, most winches are “Frankensteined,” or put together with common building materials and appliances, Ianni says.  Numerous how-to websites and YouTube videos show how to make an inexpensive winch.

But winches aren’t the only way to get a rider moving.

Bungee cords are a useful alternative. Riders tie the cord around a heavy or immovable object and pull back until the cord is taut. The boarder then stands up, faces his or her desired path and is flung towards it.

Both these tools, and urban snowboarding, have been around for decades, says Ianni. But they haven’t made it into mainstream coverage until recently.

“It’s getting pumped up more than it ever has been,” he says. “Snowboarders have seen it for a long time, but you wouldn’t really know it existed otherwise unless you were in the sport and consistently watching these videos. It’s been in magazines forever but there was never big publicity like this.”

Until now. The sport’s recent growth is largely attributed to the X Games, Ianni says. Considered the premiere competition series in extreme sports such as snowboarding and skateboarding, the X Games recently added urban snowboarding to its list of events, calling it “Real Snow.”  In Real Snow, several professional urban snowboarders submit their best clips from the past year. Fans are given a few months to vote online, and the rider with the most votes wins an X Games gold medal.

This year’s winner was Sebastien Toutant, a Montreal native whose clips garnered 49 per cent of fan votes. Toutant’s video included jumping off roofs, riding down factory walls and sliding up handrails.

“Now you’ve got people coming into the shop saying ‘I never knew you could do that,’” Ianni says.

And X Games aside, people are seeing more of urban snowboarding thanks to technological advances in film equipment and the way clips are shared. Groves editing some past clips. He says this improvement in everyday technology has given urban snowboarding a major boost.
Photo courtesy of Jordan Groves.

Kyle’s videographer, 25-year-old Londoner Jordan Groves, has experienced that technological growth.  He started filming urban snowboarding decades ago and now he’s making a feature-length film to be shown at the Hyland Cinema later this year.

“Nowadays, kids can go out and get a camera for $500 and it will have things that we never had,” he says. “You would buy a camera like that and it would cost thousands of dollars back in the day.”

In the sport’s beginning – one that has no documented origins – there was no real way of sharing clips easily unless you had connections with major filmmakers, Groves adds. Social media has helped in that regard.

“All it takes is for one person to see it and talk to friends,” he says. “Then maybe we won’t get kicked out of spots because they see in the video we aren’t damaging architecture. We’re just appreciating it.

“We aren’t some delinquents out to break stuff,” says Groves. “We see the beauty in architecture and want to make it look as good as possible with the tricks we perform on it. It’s a wonder the city of London doesn’t fund us. We make it look mint.”

Groves is normally there for filming sessions but this day Kyle has set up the tripod and is filming himself.

He lands his first run, but it wasn’t the trick he intended. He falls on his second run, his third run, and several more times throughout the session. With each spill, Kyle gets more and more determined.

He needs to get these five seconds of footage, even if it takes all day.

“There’s no measurement of success without that footage,” he says. “You could do all that work, be out there for hours, and come out with nothing. That’s a nightmare. That’s our worst fear.”

After an hour at the stairs, Kyle lands the trick, zooming out onto the road before giving a fist pump.

We move to another spot nearby an abandoned school. This time, Kyle intends to ride down a picnic bench, jump up onto a ledge and slide down the entire ledge.

He lands it first try.

Kyle lands his final trick in one take.  Video by Tucker Wilson.

“Then there’s some days where you’re only out there for a bit and you come back with multiple clips,” Kyle says. “It’s a hit or miss kind of thing. That’s something that sticks with snowboarders. They don’t know when to quit. The people that do it are definitely committed. We love it.”