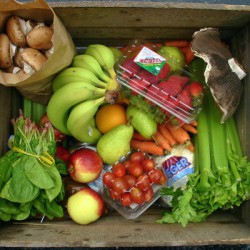 By Katherine Geleff on April 10, 2015 in Business, Community, Health

Spring has definitely not sprung. Abby Hopson is a co-founder of the Food Box Project. Photo courtesy of Abby Hopson.

The sun is not shining. The birds are not chirping. The flowers are not blooming.

But, one woman is trying to bring a little sunshine into the community.

And, you can find it in a box.

The concept is simple: Once a week, Hopson and her partner order organic food in bulk from local distributors. Then, they divide the food up into wooden boxes.

Every Wednesday, the Food Box Project distributes the boxes around the community. The boxes are filled with organic fruits and vegetables.

Hopson’s motto: “Let us do the dirty work.”

The project is all about trying new things. Often, customers don’t know what they’ll be getting in their box.

“Basically, we try and give a variety of fruits and vegetables. It changes with the seasons,” said Hopson.

And, sometimes there’s a surprise in the box.

“There are usually one or two things that people wouldn’t normally try or haven’t tried before. So, it’s kind of fun. People will be like, ‘I had no idea you could do that’ or ‘what’s a watermelon radish,’” she said. For Hopson, this project isn’t about monetary gain. It’s a labour of love.

“We get paid in produce basically,” she said.

It’s all about awareness.

“We want to help the world reduce their impact and get healthier while doing it. It’s kind of a win-win situation,” she said.

That’s why it’s important that the boxes are affordable, said Hopson.

“A lot of people are hesitant about organic food because they think it’s so expensive. What we really want to try and do is bring it back into the price range where it’s pretty much the same as conventional fruits and veggies.”

“The produce boxes get a lot more full as the season progresses. In spring, we’re going to have a lot of sprouts. The tomatoes get growing and they’re so juicy and sweet. We get berries. It’s all great stuff,” she said. The Food Box Project wants to spread healthy eating habits into schools. They currently delivery food boxes to two schools in London and are hoping to expand, said Hopson.

“We want to show what a healthy lunchbox looks likes to kids,” said the co-founder.

Although it’s hard work, Hopson said people are enjoying the fruits of her labour.

“It’s great to see people learning from each other and getting the conversation started.”

The Death of Coachella?
Canned festival to shine a light on journalism students’ work