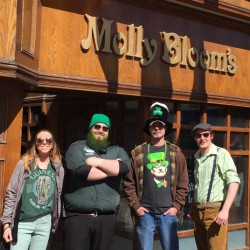 The sky was blue.

The streets were green.

From shamrock stockings to leprechaun hats, green suspenders to graphic-green T-shirts, dyed-green beards to ninja turtle costumes, everyone dressed to impress while walking along Richmond Row near Oxford Street.

“It’s a beautiful day,” said Len Blackwell, who was first in line at Molly Bloom’s Irish Pub when it opened at 11 a.m., wearing a tall black hat with a shamrock on the front, and a black T-shirt with Bill Murray dressed as a leprechaun on it. “I plan on going to a few places throughout the day.”

In the weeks coming up to St. Patrick’s Day, people look for anything green. They swarm everywhere from Richmond Row to Masonville Mall. With the warmer weather and the end of school on the horizon, St. Patrick’s Day offers the last big chance for businesses to take advantage of London’s student population.

Next to Halloween, St. Patrick’s Day is one of the biggest sales days of the year, says Hilary Dombokah, the manager on duty for American Apparel on Richmond Row. Sales usually peak for the store around fall when students come back to school and need outfits for homecoming and Halloween, she said. Then sales slow around the winter holidays when people are choosing the mall over the outdoor strip. But with spring nearby, St. Patrick’s Day is one of the last opportunities for businesses to bank on student spending before they go home for the summer break. So places like American Apparel push all the green they can, from basic green T-shirts and tights, to scrunchies and knee-high socks.

And it’s not just the girls. The craziest outfits have been purchased by the guys who come in looking for green leggings, she said.

“Girls tend to stick to what they already like and try to dress cute,” Dombokah said. “Guys are the ones that go over the top.”

Stores like American Eagle and Forever 21 at Masonville Mall have also seen anything green fly off their shelves, with only a few pairs of shamrock boxers left on the racks. But it’s clear where these outfits end up.

Bars like McCabe’s Irish Pub  & Grill on Richmond Street also got a fashion show as students glide by their window and into their pub for some green beer, said manager Laura Nielsen.

But it’s not just a time for customers to get into the St. Paddy’s Day spirit. The bar offered signature green beer, an Irish band and a number of employees who are dressed up for the occasion. This included Nielsen, who’s dressed up like a leprechaun for the holiday.

“Think of the Octoberfest girls, but more Irish,” Nielsen said.

By one in the afternoon, the streets were like an emerald sea. Green balloons and Irish flags hung from outside pubs to celebrate the occasion. It’s the last time that many local businesses will see students out in such numbers until next September. So for them, St. Patrick’s Day truly is a time to celebrate.