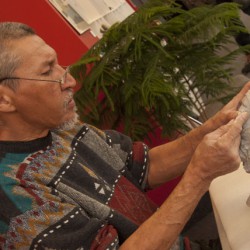 Gabriel Beaulieu is hunched over his medicine man.

Leaning in, he gently presses his scalpel into his subject’s eye and slowly scrapes away at its socket. He exhales, and a small cloud of rock fragments lifts off the medicine man’s pale, unblinking face.

“This could take me a month or so with all the details,” he said of his soapstone sculpture.

Beaulieu pauses to survey his work, then wipes his hands with a dark rag. He reaches for a cup of coffee, sitting by his collection of homemade chisels.

Beaulieu is seated at a small table at the front of the Innuit Gallery on Queens Avenue. Sunlight streams through the glass walls, illuminating the First Nations paintings, sculptures and prints on display. The gallery has been exposing First Nations art to Londoners since 1983. Although the official 30th anniversary isn’t until Aug. 1, the gallery’s owners are planning a series of special events all year, including live demonstrations by sculptors like Beaulieu.

“We hope to bring down an artist from the Arctic,” said gallery co-owner Janet Evans.

Beaulieu, who is self-taught and he has been sculpting for the past 16 years, is originally from the Sandy Bay Ojibwa First Nation, found half-way up the western shore of Lake Manitoba. He now lives in London. His carving career began at a gallery just like this one.

“I used to do a lot of paintings and a friend of mine asked me to come to an art show he was putting on (at Six Nations of the Grand River First Nation near Brantford, Ont.) because he’d seen one of my paintings and he liked it. So I went over there and I fell in love with the sculptures,” he said. “So I worked out in the back and that’s where it all began.” Gabriel Beaulieu says it will take him a month to finish his sculpture because of the fine details.
Photo by Josef Jacobson.

Beaulieu turns his sculpture over to work on its base. At the medicine man’s feet, Beaulieu has carved a stack of logs, which he says symbolizes the roof of a sweat lodge. Four buffaloes protrude from its sides.

Beaulieu’s sculptures aren’t the only ones on display here. Evans walks over to a shelf to show off one of her latest finds by another artist. It’s a sculpture of a hockey goalie. “It’s a new piece, very contemporary. He’s a goalie but you’ve got stone, you’ve got baleen (whale bone), and the frame is from bowhead whale and then the sinew,” she adds, running her fingers over the goalie’s net. “It’s all very natural. When we saw this we just fell in love with it…They use every bit of the animal.”

Evans has worked at the gallery since the beginning, but she started collecting Inuit art in the late 1970s. She says the early years were the hardest for the gallery.

“At first it was a bit of a struggle,” she said. “We were five years on Richmond Street and then we moved down here where you’ve got all these windows. That made all the difference in the world because people can see what we’ve got.”

Evans says that people were initially unfamiliar with First Nations art, so she had to educate their visitors.

“It was exciting. It was something London didn’t have,” she said. “This was the first place devoted to First Nations and Inuit art.”

Now the gallery has international clients. They’ve received orders from as far away as Luxembourg and Japan.

“It’s an extremely visual art,” Evans said. “The Inuit person transcribes what they see every day to the stone. You’ll see a lot of animals. You see transformation, spirit figures, mother and child. But they’re very visual people and they execute masterpieces in their carvings.”

“It’s just a piece of Canada, and it’s very important that we don’t forget that.”