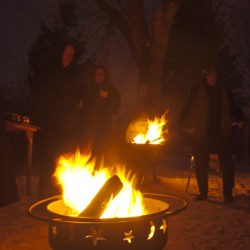 By Josef Jacobson on February 12, 2013 in Community

As the night falls and the snow swirls in a suburban London backyard, the Druids are gathering for their ritual. They form a circle around the fire pit.

“May the gates be open,” the disciples reply in unison.

“The gates are now open and the kindred can hear our words,” Silverstag says. “May our words be true. May our actions be just. May our love be pure.”

These are the People of the Dark, Flowing River, London’s Druid congregation. They are celebrating Imbolc, the halfway point between the winter solstice and the vernal equinox.

“The ancestors would gather together to seek omens of the coming year, to honour the triple goddess Brighid and to bless the crops for the coming season,” he continues. “This too we shall do.”

Druidry is a pre-Christian pagan religion from the British Isles with an emphasis on nature worship. This congregation, also called a grove, was organized by Silverstag in 2011.

“There’s a pretty big pagan community in London,” Silverstag said after the ritual. “It’s just that there’s very few open, publicly accessible groups. A lot of the groups are closed or there’s just a lot of people who are solitaries.”

The grove has 13 members including Liz Gerrow, the grove scribe. She first learned about Druidry in high school.

“I fell in love with it. It made sense and I just needed to know more about it,” she said. “It just melded so perfectly with who I was. It gave me a name to call myself that other people could understand.”

The first modern Druid associations were formed in England in the late 17th century, and they grew and spread throughout the next 200 years.

“The roots of modern paganism lie in the Romantic Movement and transcendentalism of the early 1800s,” said Sabina Magliocco, neo-pagan author and professor of anthropology at California State University, in a telephone interview. “The people who were living close to nature were seen as preserving a spiritual connection that urban people who had moved off the land no long had.”

By the early 20th century, these notions crossed over to North America.

“There were a number of groups here in the United States that were interested in those kinds of ideas,” said Magliocco from her home in Los Angeles. “They also mixed them with interests in European esotericism. Ideas about magic as a kind of high art, magic as a way of refining the human soul and becoming closer to the sacred.”

Magliocco said some modern pagan groups take part in interfaith outreach programs and charity work to combat negative pagan stereotypes. The People of the Dark, Flowing River is one of these groups. This past September the grove planned an environmental river clean-up, but had to cancel due to bad weather and unsafe conditions. The grove also participates in an annual Pagan Pride Day, which was held for the third time last August in Gibbons Park. While some Druids are now more open about their beliefs, they can still face discrimination

“I belonged to a group that did try to do outreach by donating a quilt to a certain charity organization in Stratford and they literally turned it down because it came from pagans,” said the grove’s chief seer Fallon Wilson.

Despite the misunderstandings and public perception towards those who choose not to subscribe to mainstream religions, Silverstag believes he’s made the right spiritual choice.

“When I was growing up you said the Lord’s Prayer in school every day,” Silverstag said. “You get into the mode of thinking that there’s just one choice, Christianity. But for a lot of people it just never fits. It’s not what you feel deep down. So you think that your only option is being an atheist, but that’s not the case. If you find out about another religion that sort of tweaks with you, then it really does feel like coming home.”

The next festival on the Druid calendar is Ostara, which celebrates the vernal equinox on March 20 of this year.

Wheels keep on turning, even in the cold
London festival spotlights Canadian cinema