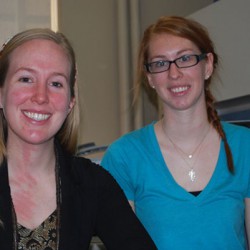 Alex Hockin knew something about international development before going on a volunteer trip to Malawi two summers ago.

But the Western University engineering student’s knowledge was mainly academic and abstract.

What she got in the southeast African country was first-hand experience of third-world problems, and it changed her.

“You hear a lot about different theories of development in Canada,” said Hockin, 22, in an interview at Western’s Spencer Engineering building.

“You can take whole courses on it, but to study it from a very abstract and disengaged point of view is much different than to actually go and live in the communities.”

Hockin went to Malawi as a junior fellow with Engineers Without Borders (EWB), a group committed to helping rural Africans access clean water, generate income through farming, and get access to critical infrastructure and services, according to its website.

The group believes poverty is a product of “broken systems that prevent people from realizing their full potential,” the website states.

Rather than focusing on short-term solutions, EWB works to “create lasting, scalable change” that unlocks potential.

Hockin is part of a Western EWB chapter that supports those ideas and is helping mentor the university’s next junior fellow – third-year mechanical engineering student Lauren Cutherbertson.

Cuthbertson is heading to Malawi this summer to do water and sanitation work, though it’s unclear exactly what her volunteer project will be.

The Western EWB chapter is supporting Cuthbertson’s trip with an art auction scheduled for tonight at the London Hunt and Country Club.

The goal is to raise $5,000 or more through the event, which will offer work from London artists and artists from overseas.

Megan Campbell, a former junior fellow and former leader of EWB’s water and sanitation team in Malawi, is slated as a guest speaker.

Western engineering student Lauren Cuthbertson will travel to the African country of Malawi (highlighted above) this year.
(The World Factbook.)

It’s important for Western EWB to support placements like this because of the experience students bring back, said auction organizer and EWB member Jessica Barker.

“Supporting smart development is something that we’re all very passionate about,” Barker said.

“But in addition to that, just supporting Lauren in particular … the learning the chapter can have from her coming back and talking about her experiences is invaluable.”

Barker is a master of engineering science student at Western who gained an appreciation of international development during a trip to Ghana in 2010.

“I try not to be critical of North American values and culture, but you hear about the ‘white person problem’ or the ‘first world problem,’ ” Barker said.

life and the things that aren’t that important to get worried about,” she said. Barker noted, for example, that North Americans might get angry if a bus is 10 minutes late whereas in Ghana they were regularly four or five hours off schedule. Food choices were also much more limited there than here.

“It was a transformational experience, to say the least,” she said.

Both Barker and Hockin hope to do more development work in the future, though neither is exactly sure what shape it will take.

“Definitely my experience in Ghana contributed to that, because up until then I hadn’t actually worked in a developing country,” Barker said.

“There are strains you have to go through – being far away from your family, sometimes getting sick, changes in climate and food and stuff like that,” Barker added.

“But now that I know I can do it, there isn’t anything holding me back from continuing that in the future.”

Hockin would consider a longer overseas placement with EWB or working with another non-governmental organization, she said.

And it was that trip to Malawi two summers ago that helped set her on this path.

“Hands down, (it was) the best experience of my life,” she said.

“It definitely changed my view on development and influenced what I want to do with my life.”

When: Tonight from 6 p.m. to 9 p.m.
Where: London Hunt and Country Club
Why: Proceeds will support a volunteer trip to Malawi for Western Engineering student Lauren Cuthbertson
What you’ll need to get in: A ticket bought at the door or in advance
Contact: Organizer Jessica Barker (jbarke3@uwo.ca)