Using Facebook to tell your elusive spouse you’ve started divorce proceedings is not about to become the standard method of serving documents, but it’s slowly becoming part of the legal repertoire.

“This is the latest evidence that social media is maturing beyond its adolescent, selfies-and-breakfast-pics days,” said Carmi Levy, journalist and technology analyst expert living in London, “and is ready to be taken seriously as a full-on, trusted communication platform in its own right. As the legal community gradually becomes more comfortable using services like Facebook to manage cases and proceedings, social media will increasingly seem more mainstream and less counterculture.”

And it’s been happening in Ontario for about five or six years, said Stephen Pitel, expert in the conflict of laws, tort law and legal ethics at Western University’s Faculty of Law. In family law and in other forms of litigation, people initiating legal proceedings have been going before judges and asking them if they can use Facebook as a means of contact.

“Historically, the kind of iron-clad, straight forward normal way you did this – in the case of an individual defendant – was you made sure that a copy of the formal document that commences the proceedings was physically handed to the defendant,” he said.

The legal system needs exceptions, though, he said.  “Look I’m a plaintiff. I’m trying to start litigation against this defendant. Here are all the things I’ve tried to do physically to give the document to the defendant. None of them have worked.”

When a person initiating a legal proceeding delivers documents to another person, it’s called personal service. That person’s lawyer might also deliver the documents.

But it’s not always so easy finding people you want to divorce or sue. They don’t answer their door. They might keep the lights off. Or they might be a fast runner, said Pitel. 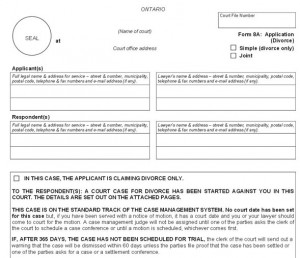 “There’s a whole industry of people called process servers that you hire to go out there,” he said. “And their job is to tail people or find people and sort of jump out from behind a tree and hand them the document…”

That’s where Facebook comes in. It’s a method of last resort for people who have made attempts to find someone.

It made headlines earlier this week in New York City when a judge let Ellanora Arthur Baidoo send Victor Sena Blood-Dzrakuuse a private Facebook message telling him she intended to divorce him. They had married in 2009 but never lived together. Occasionally, they spoke by telephone, but he wouldn’t tell her his address or whether he worked. She hired a private investigator to find him, but no record of his whereabouts was found.

“It does, potentially, generate a broader debate…why don’t we change the default rule? In other words, why are we only doing this in exceptional cases?”

A 2010 issue of the Law Times, a newspaper dedicated to Ontario’s legal scene, argued that the use of social media would improve access to justice for many people. It would speed up a notoriously slow court process and save clients’ money.

Each legal form has an associated cost that is passed down to the client.

Pitel said there are good reasons for putting a hardcopy document in someone’s hand. It assures the court that the intended person received it.

But if there are qualms about whether a person on the other end of a Facebook account is masquerading as someone else, Levy said there are safeguards.

“Facebook has implemented a number of processes and protections designed to ensure that the person who signs up for an account – and signs into it regularly thereafter – is indeed the person he/she claims to be,” he said. “The company also has a dedicated team assigned to reviewing accounts for validity, and deleting those that are deemed fraudulent. With these safeguards in place, judges are slowly becoming more comfortable using the platform as a trusted means of communication, where legal documentation that is sent electronically can be just as verifiable as something that would have otherwise been delivered by hand.”

Pitel said an affidavit from the person who sent the message would also satisfy the court. They wouldn’t necessarily have to prove the person got the message.

“What the judge is basically doing is saying, ‘Plaintiff, all right, fine, do the following, and we’ll call that service.’ And in effect, [he’s] not that worried about whether or not it actually comes to the defendant’s attention because I think this is a case where the defendant does know that they’re being sued.”

But Facebook is equipped with tools to track how messages are sent and received.

Even if a person doesn’t respond to a Facebook message, the court will consider all avenues exhausted. And that means the petitioner will likely win the case by default.

“If she was claiming spousal support,” said Erin Reid, family law expert at McKenzie Lake Lawyers in London, “she’d get those orders on a default basis.” The divorce would proceed uncontested, she said.

Although there is some way to go before Facebook can shuck off its substitute status in the eyes of the law, recognition of its advantages and adaptability is gaining ground.

“Absentee-husbands, fathers and other scofflaws have fewer and fewer places to hide from Legal Big Brother’s ever-expanding gaze,” said Levy.