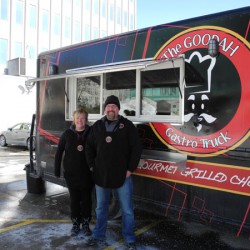 For Jim Godina, the worst of times happened in 2004 when he was in a car accident that would change his life.

While driving along a slick, wintry road, Godina’s car slipped on a patch of black ice and spun out of control into a ditch.  Godina, 47, survived the crash but sustained a severe spinal cord injury.

Doctors told him he might never walk again, but after months of physical therapy, he got back on his feet.

Despite the accident, the Caledonia, Ont., native hasn’t shied away from cars. He and his wife, Lori, now operate Dobro Jesti, a Slovenian-inspired schnitzel food truck, as a way to pass on his favourite family recipes. Once a week, Godina drives his Slovenia-style wares to Toronto where he faces a challenge of a different kind.

Food trucks like his currently aren’t allowed on most of the city’s streets, and they can’t sell on private lots for more than 10 minutes. He says city regulations have made it difficult for food trucks to set up shop.

“There are hardly any trucks out (in Toronto),” he said.  “They’re going to start coming out now, but…there are not a lot of places to go. It is all private property still and it is very difficult.”

Pioneers, like Godina, of these new gourmet-style meals-on-wheels have run into a few roadblocks in at least two Ontario cities over the past several years.  But the best of times could be en route this spring because of recommendations that could make it easier for food trucks to operate on city streets.

Chris Bunting, 40, and his sister Mary Mayo opened the truck, one of the first in the city, last December.  Over the years, the two had discussed opening a restaurant or a pub together. But they fell in love with food trucks after those types of eateries began rolling out in cities across the continent.

Mayo, 36, has 20 years of experience in the restaurant industry in Canada and the United Kingdom.  Bunting calls her the “genius” behind the operation because she developed the idea of selling gourmet grilled cheese sandwiches. “You grow up with (grilled cheese) and it has that comfort food feel to it, and we felt it was a good cross between a comfort food and gourmet,” he said.

Bunting and Mayo are leasing space in a lot across the street from St. Paul’s Cathedral because the city’s bylaws restrict them from operating on the street.

“I’ve had people come to the truck and say:  ‘Wow! How long have you been here?’ And they’re amazed because they’ve walked or driven by and haven’t seen us because of the snow,” said Bunting.

London was supposed to allow food trucks to hit the streets last summer, but delays in drafting bylaws plagued the proposed pilot projects. Ward 5 Coun. Joni Baechler says that there was a fear that the plans wouldn’t attract the gourmet-style food trucks the city was looking for.

“We really felt we would end up with a bunch of hotdog and chip wagons, which we already have in the city,” she said.

London is expected to release its new food truck recommendations in the spring.  The city’s chief bylaw official, Orest Katolyk, told CTV London earlier this year that the proposal will allow for food trucks to park 25 metres away from brick-and-mortar restaurants.

Ward 13 Coun. Judy Bryant, whose ward consists of much of the downtown, believes the city should approach food truck expansion with caution.

“We don’t want to be competitors with any restaurants, which could be struggling to get through the economic downturn,” she said.

However, Baechler says food trucks would not be in direct competition with restaurants and could attract young professionals to the downtown core.

“We’ve got really great restaurants and fast food, but I think this is just one more type of culinary experience that would be important in the downtown,” she said.

Meanwhile, back in Toronto, several councillors have suggested food trucks will be able to park between 20 to 50 metres from  brick-and-mortar restaurants this spring.

Ward 22 Coun. Josh Matlow told the Toronto Star that he believes the recommendations can help to create some bureaucratic wiggle room for food trucks. They seem to be turning some of those most draconian street food regulations in North America into the freest food truck policy on this continent,” he said. Jim and Lori Godina are ready to serve from their food truck Dobro Jesti. Photo courtesy of Dobro Jesti.

There have been several attempts to diversify the street food available that has been dominated by hotdog stands.  In 2009, Toronto tried to bring healthier and ethnic food with a curbside pilot project called a la cart.  However, the city shut down the program after a year because of overly tight restrictions and pricey $30,000 mandatory equipment.

Despite the difficult location in London, Bunting is optimistic that Goodah Gastro’s food will stand out and bring the customers to them.  His sister uses whatever local products she can find including bread, cheese and produce.

“If the word gets out, ‘we just had the best grilled cheese I’ve ever had,’ people are going to come find us,” he said.

As for Godina, with the help of his wife and a brace on his right leg, he has been able to withstand the rigours of running a food truck business. They too try to get their ingredients locally and add their own signature touches to traditional Slovenian dishes.

Godina concedes that it has been a lot of work, but he is excited to help feed the diverse tastes of Torontonians.

“That’s what it is really all about: people want to try different kinds of flavours – they want to see different parts of the world on the street.”