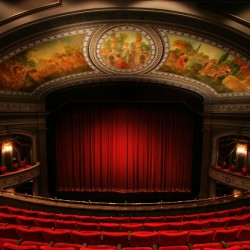 Shakespeare once wrote “All the world’s a stage,” and today that’s never been more true.

Created in 1961 by the United Nations Educational, Scientific and Cultural Organization (UNESCO), World Theatre Day’s goal is to celebrate the “power of theatre,” according to its official website. Theatre has the ability, it states, to unite varying communities and protect cultural diversity and identity in communities.

“It crosses generations,” said Ferley.  “It reflects upon a diversity of experiences.  It provides an opportunity to spend time with people in a social environment and communicate in a very immediate way with other human beings.”

That immediacy, Ferley continued, is something lost in today’s technological age.

“In our everyday world, we’re often in front of a screen,” she said.  “[But] us connecting with more human experiences is valuable.  We all recognize it.  The young people find it in different ways, but they can’t forget theatre.”

Forgetting theatre has been an issue in Canada lately.  According to Statistics Canada, performing arts profits were cut in half between 2010 and 2012, a difference of nearly $42 million.

The U.S. is facing similar declines.  Since 2008, the average number of live theatregoers per season has dropped by two million people.

And here in London during last year’s season at the Grand Theatre, performances averaged 473 people per show, just over half of the venue’s capacity.

Ferley hopes World Theatre Day might bring back some people to the Grand.

“It’s a reminder for people who go to theatre,” she said. “But also for those who don’t go to theatre, to take another look and remember a past experience and say ‘Yes that did enrich my life,” or ‘That moment was transforming for me.’

“[And today] is going to remind us to reflect upon what theatre is and help share our person, our love of theatre, and our love of community with others.”