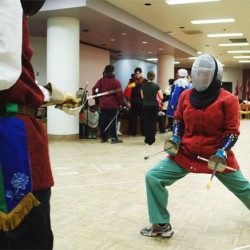 It’s a Thursday night and a couple rides a city bus, swords in hand, on their way to London’s Parkwood Hospital.

Inside the hospital, the couple heads to the bottom floor and enters a large room down a hallway.  Inside, men and women, young and old, are suiting up in protective armour.

The 20 people gathered here tonight are just some of those belonging to the Shire of Trinovantia Nova – a Middle Ages living-history group based in London.

This group is one of many that make up the Ontario-based Kingdom of Ealdormere. It’s the youngest of 19 worldwide kingdoms belonging to the Society for Creative Anachronism. The SCA boasts 30,000 members and was founded in 1966 with the goal to celebrate the arts and skills of pre-17th century Europe.

Jessica Cann, 31, works in London during the day as a substitute teacher. But here at fencing practice, she is Lady Jessica of Henderson, Zombie Slayer and Bard of the White Rose.

Jessica Cann in protective armour. She joined the Shire of Trinovantia Nova four years ago.
Photo by Sam Burgess

The finesse and skill of fencing, mixed with an appreciation for history, was the reason Cann decided to join the group four years ago.

“It is very similar to an energy and an appreciation of cultures I’ve always loved,” she said. “So the chance to actually be in something that is possibly the gentler of any combat sport I have seen is really huge.

And, of course, there are more obvious motivations for joining the group.

Cann is also a member of the Double Dagger Ninja Crew. The name comes from her preferred fighting style, using two lightweight short swords, rather than the longer and heavier weapons preferred by some.

“They’re much faster and easier to use, and people look at me like I’m insane when I walk out with two daggers,” she said.

“And then I smile and I kill them.”

Matt Bagshaw, or Lord Wolfgang Donnerfaust, 39, is a volunteer with the group. He also engages in armoured combat, but in a category using heavier weapons than those found in fencing.

It’s a hobby in sharp contrast to his work as an estimator for a London glass company.

“I sit behind a desk all day, work with computers all day; I’m crunching numbers, I’m dealing with modern technology all the time,” Bagshaw said. “And on weekends I put on armour and play with my friends.”

But opportunities exist for someone to learn any number of medieval skills and trades. Participants at the Winter War in full combat armour.
Photo by Sam Burgess

“The fighting is the easiest draw . . . but there is a whole other side to it too with arts and science as well,” he said.

Both elements were on full display Saturday at the Winter War – an annual London SCA event that saw more than 230 people from across the kingdom dressed in period clothing and celebrating medieval culture.

London’s Wilfrid Jury Public School was converted to a medieval hall with singing, dancing, food, art and celebration. Even the King and Queen of Ealdormere, a position that changes every six months, graced Trinovantia Nova with their presence.

But the loud clang of wooden weapons on metal armour echoing through the school gym turned makeshift battlefield left as big an impression as the royal couple. Watching the latest wave of fighters clash together, Bagshaw, who organized the event, lets out a frustrated sigh. It looks to him as if someone may have received a kill shot, but refused to go down.

There’s a referee known as a marshal to oversee combat, but often it comes down to an honour system amongst fighters if a hit landed well enough. Despite this apparent oversight by the participant, Bagshaw isn’t quick to judge.

“You can’t know the whole story unless you’re the one under the helm,” he said.

Living by a system of honour from the past is what attracted Michael MacDonald, 42, to take part in the SCA these past 16 years. Going by the name Thorolf the Smith, he has experience as an SCA marshal. He knows training and discipline are needed before someone is ready for the excitement of battle. Mike MacDonald drove two and a half hours for this years Winter War.
Photo by Sam Burgess

“We describe it as full force, un-choreographed combat. So we’re actually really trying to hit each other, with certain guidelines,” MacDonald said.

And while the fighting is exciting, the chance to connect with people who are experts in many fields of medieval culture is something anyone can appreciate, he said.

“One of my mottos that I tell people who are starting out is if you are not having a good time then you’re doing something wrong.”