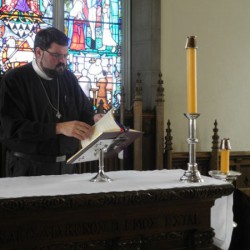 On a rainy afternoon in March, the chapel is both a place of refuge and activity. Beneath its peaceful atmosphere, the space buzzes with energy.

The chaplaincy is a small operation – an organist and a handful of student assistants round out the staff list – but its role among the Huron community is significant.

The college was founded 150 years ago in 1863 as an Anglican seminary and evolved from its theological roots into a reputable liberal arts institution. “So much of the college’s identity is tied up with the church,” said Cliff. The chaplain’s office gives a sense of this historic presence, one that resonates in every corner of the college. Bookshelves are brimming with intellectual texts and an array of Huron’s emblems hang from the walls.

Cliff’s own charisma and style are also reflected in the room. A bottle of scotch sits inconspicuously beside his desk, not far from a collection of Thomas the Tank Engine toys. The chaplain sees a wide range of people needing his assistance and stays prepared for anyone or anything that may walk through his door.

“Everything that happens in the world happens here,” Cliff said.

From marriage and baptismal preparation to assisting with music practice to helping students adjust to university life, the chaplain’s work is diverse.

Throughout the afternoon, students and faculty pass through Cliff’s office. “We call it Club Bill,” said Bill Acres, a professor of theology at Huron. “Everybody just comes in for five minutes and sits and you feel so much better.”

“It’s the nerve centre,” Acres added. “I come in here just to figure out what’s going on in the college.”

As part of his chaplain duties, Cliff takes on a heavy counselling load. His open door policy ensures anyone needing help can seek him out.

Huron’s chaplaincy is part of the diocese of Huron and functions as a regular parish, but relies on a strong student presence. Cliff estimates that 45 parishioners regularly attend services during the academic year, a number that drops off in the summer months.

“When term is in, it’s constant, it’s high-end,” he said. “It’s the administrative and counselling equivalent of a wall of sound coming at you and you just do your best.”

The chaplaincy is the spiritual and religious face of the college, but it’s not university funded. Apart from an office space and telephone, support comes from the diocese.

“We’re spread very, very thin,” Cliff said. “Western is non-religious, so they don’t give any money, but we are a resource for them.” He said the chaplaincy still plays an important role in the educational development of students. Theology students use the chapel as a learning space and the restored Casavant organ is used for music lessons.With eight organ students this year, the practice schedule is tight.

“Activities in the chapel divide up between those in which the organist can continue to play and those in which you need silence,” Cliff said with a chuckle.

Throughout this particular afternoon the organ music intermittently punctures the peaceful chapel space. But across the hall, Cliff’s office traffic is steady.

Despite the long hours he puts in, Cliff remains dedicated to his post. “I love what I do. I’ve been here 10 years and it seems like two weeks,” he said. “It’ll keep you young.”

As the rain outside dissipates, Cliff walks to the chapel’s altar to prepare for a Sunday service. It’s part of his duties in faithfully continuing Huron’s 150 year-old tradition of religious service.

“The spiritual part of what it is to be educated, Huron has always had that at the forefront.”