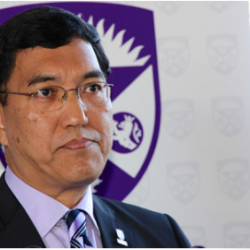 Clouds loomed overhead before a talk about problems with Ontario’s Sunshine List.

A Senate meeting will be held today at Western’s new Ivey Business School building to discuss a motion of non-confidence in Western University’s President Amit Chakma, and Chair of the Board of Governors Chirag Shah.

The President will address the controversial payment of an almost $1 million salary, signed off by a committee on the Board of Governors last year. Chakma was the fourth-highest paid government employee in the province, and highest-paid university president.

The money was given to Chakma as a lump sum payment after he chose to work through administrative leave. His usual salary is $440,000.

The UWOSA decided to hold the vote after hearing outrage from many of their members. They held a general annual meeting Thursday that saw about 90 per cent of their members vote non-confidence, said UWOSA President Karen Foullong.

The issue they’re most concerned with is why money is being given to the President, when cuts are seen everywhere else, said Foullong.

“We’ve actually had in the last five years many layoffs and lots of position eliminations,” she said. “We have more and more work to do with fewer and fewer people and it’s caused a lot of stress in our members.”

This sentiment is also felt by other members of the university community, such as Cliff Davidson who is the organizer of a protest that will take place at today’s Senate vote.

Davidson wants to address the university’s mismanagement of funds, and agrees the staff is overworked and underpaid. But the sociology PhD candidate also stresses that it also affects students.

“[Teaching Assistants] are living below the poverty line, students are getting poor education because they can’t talk with professors from student sizes,” Davidson said.

The peaceful protest will hear from members of the university community outside of the Ivey building before the Senate meeting at 1:30 p.m. From there they plan on sitting inside room 1100 of the building to give a face to the people affected by the funding.

It’s supporters include those who have taken part in an online petition, that has seen more than 5,700 signatures as of Friday morning.

“Tuition keeps getting bigger but education received is getting worse and worse,” Davidson said. “But upper administration pockets are getting lined.”

However, Chakma announced he will be returning part of his salary from the controversy, and agreed that in hindsight it was a mistake in an interview with Western News on Thursday. He said he hopes to show Western that he will focus less on external issues like fundraising, and pay more attention to the issues on campus.

But Foullong just hopes no matter what the outcome, that there it shakes up the priorities on campus to focus on teaching and researching and the people that support that mission.

“Some people have had to take second jobs to make ends meet,” she said. “Learning that our university president Chakma had this agreement with the Board of Governors is really a slap in the face.”