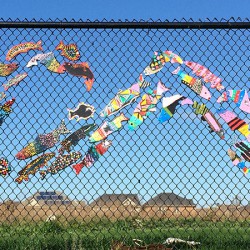 By Patricia Barrett on March 20, 2015 in Community

Something fishy is about to get underway in two Thames Valley district schools.

The school board has adopted an environmental art project called Stream of Dreams to teach elementary students about water pollution.

Staff from the Upper Thames River Conservation Authority and the Dorchester Watershed Action Committee will be at Northdale Central Public School in Dorchester Monday to give a workshop about the local watershed.

“They’ll be painting their own fish,” said Erin Mutch, environmental education and management coordinator for the Thames Valley District School Board.

Not real fish, of course. They’re made from wood.

This project is one of many environmental protection initiatives Mutch co-ordinates for the school system.

“Our actions are linked to the environment,” she said. “And it’s important for children in our community to be involved in its protection.”

Stream of Dreams took shape in the late 1990s in British Columbia. Burnaby resident Louise Towell raised awareness of the importance of the watershed after toxic material was dumped into a storm drain, killing 5,000 fish in Byrne Creek.

With the help of local children, she painted 5,000 wooden fish and mounted them on a chain-link fence near the site. The “fish mural” served as a reminder to the community of the effects of pollutants.

“The community-education specialist will speak about what happens to the water in students’ homes,” said the conservation authority’s spokesperson Linda Smith.

With the assistance of staff from the Dorchester committee, the specialist will teach students about the water cycle. They’ll be given practical advice on how to prevent pollutants from entering storms drains and sewers.

What goes down the drain or runs off your lawn eventually makes it into the watershed. This includes pesticides, herbicides, household chemicals and medications.

“Even the soap we use to wash our cars can harm our water,” said Mutch. 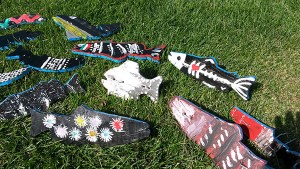 But this is the first Stream of Dreams in Southwestern Ontario, said Smith.

After the workshop, Northdale’s students will head to a designated painting room where they’ll find smocks, paint and brushes.

Judging by the fish painted by students who’ve already participated in a Stream of Dreams environmental project, Dorchester’s mural should be bright and colourful.

“What’s really nice about this project,” said Mutch, “is the amount of support we’ve been given by the local community.”

Local Dorchester businesses stepped up. “Lind Lumber supplied the wood and Home Hardware supplied the paint and primer,” she said. “And the Kinsmen Club and the Optimist Club provided some funding.”

High-school students at Lord Dorchester Secondary School have already sanded, primed and drilled holes in the fish so that the elementary students can focus on painting.

The fish will be varnished and dried in old pizza boxes. And on Monday, March 30, they’ll fix their fish mural to the school’s fence.

“Our fish are a promise to protect the watershed,” she said.

A quarter-pounder with cheese, hold the jersey
Coming out for coffee, conversation, and support