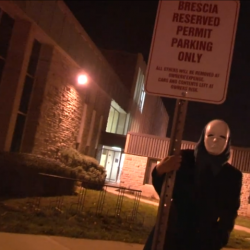 The lights dim and a hush falls over the audience. For a moment, there is complete darkness. Then a deep, distorted voice breaks the silence.

“I started off with just hard drugs and stuff,” booms the voice. “Then I discovered grammar and I could really get into that.”

The three and a half minute film features a group of students who are fed up with grammatically incorrect signs on campus parking lots. The band of vandals zeroes in on parking lot signs that warn owners their cars will be towed. One of the signs the Grammar Vandals sought to correct.
Photo courtesy of Christopher Beaulieu.

The signs read, “Permit parking only. All others will be removed at owners expense,” missing the apostrophe.

“The idea for the film actually came from this group of people,” said Beaulieu. “One in particular you could say is an expert on grammar, and she kept seeing all these missing-apostrophe errors on Western street signs and thought that something had to be done about it.”

“Originally we thought about just going out and painting an apostrophe onto the sign,” he said.

“But that just seemed too anti-climactic. So why not put on masks, create these characters who are obsessed with grammar and go out and film?”

Grammar Vandals was one of 10 official submissions for the film festival. They included documentaries about the blizzard of 1977 and accident survivors learning to walk again, comedies about the life of a fictional child star and high school relationships, innovative, avant-garde works featuring different uses of light on film, and a performance piece in which the director splices in random strips of film, stringing together a movie on the spot.

The films and performances received an enthusiastic response from the 70-plus person crowd that settled into London Public Library central  branch’s Wolf Performance Hall on a Friday night.

“The festival is a really great way for film students to get some hands-on experience and go beyond the theory we learn in the classroom,” said festival co-coordinator Katie Wilks.

“It’s also a really great chance for the student and London community to see local film makers and students. It’s a great way to help promote local creativity,” she added.

Promoting the London art scene is a key part of what the film festival is all about.

“We want to provide a platform for students to find the support and insight they need to improve their work and succeed,” said festival co-coordinator Christine Neumann.

Beaulieu appreciates the outside help and advice he can get at the festival from other filmmakers, viewers and the panel of judges.

“They can be a big help,” he said. “But I’m most excited to have another platform where I can just get it out there and people can see it.”

Beaulieu enjoyed his first foray into filmmaking and thinks he’ll do it again. After his first production, he has some advice for anyone looking to get involved.

“Do it with people you care about,” he said. “Make sure everyone’s really passionate about the project – that’s how you’re going to get things done. Everyone really cared about the project and that made it really fun, it wasn’t a chore to make.”

Getting #LdnOnt involved
Comic books in the 21st century