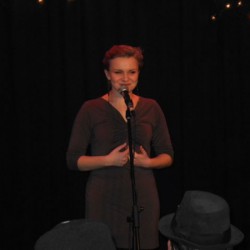 The image of the poet on a stage in a trendy low-lit coffee house, surrounded by people in dark clothing and peculiar French hats, is dead.

While some hats remain peculiar, slam poetry ensures the crowd has become livelier, the events are held in pubs and clubs, and the words spoken have become more impassioned, powerful and provocative.

London’s slam poetry scene has been growing for the past six years, and Emilee Nimetz will be this year’s representative at the Verses Festival of Words in Vancouver from April 8-13.

“I’m so excited. I’m going to see all these amazing poets, I get to compete, and I get to share my words. I’m so pumped to go in and absorb every minute of it,” she said.

Nimetz has performed in every London Poetry Slam event in the last year and, for the past few weeks, has been busy fundraising  to subsidize her trip to Vancouver. Her goal was to raise about $1,000, she said, and she can’t believe the help she’s received, including from a sister who baked cakes for a tea party at Nimetz’s house.

“I want to say thanks, but that’s just not enough. I’m feeling overwhelmed but just so supported… Even by so many people I didn’t know before, and people I’ll never meet,” she said.

This past Friday, Nimetz performed at the London Music Club—the usual venue for the slams—as a guest in honour of her upcoming trip to Vancouver.

The venue is small and intimate, and the walls are adorned with the works of masterful painters. Canvases with images of oddly shaped vases, coffee cups and martini glasses decorate one wall, while the other walls are filled with abstract art featuring lavish blends of blues, turquoises, yellows, and reds, as well as psychedelic versions of trees, oblong human faces, and celebrity caricatures.

On stage, Nimetz shared the three poems she plans to use in Vancouver. Baring her soul with a poem about her deepest wishes, and another about a desired romantic encounter—raw with phrases like “I would like to do you,” and the occasional curse word to emphasize her feelings—Nimetz enraptured her audience.

Even mid-performance people snapped, clapped, and shouted with excitement.

Nimetz was followed by the evening’s feature performer, and the 12 volunteer poets who would have signed up when they are arrived at the door. 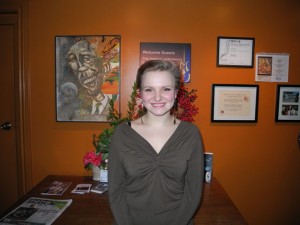 Emilee Nimetz has performed in every slam poetry event in London for the past year.
Photo by Andrea Smith.

The poets take the stage in turn and are awarded points on a 10-point scale by each of five judges. Tonight, Nimetz as a guest, wasn’t given any, but the points are kept track of all year, said Holly Painter, director of London Poetry Slam.

London Poetry Slam decides who will go to the legendary Canadian Festival of the Spoken Word based on each poet’s accumulated points, said Painter.

Nimetz was in good standing when London Poetry Slam was deciding who should go to Vancouver this year, said Painter, who was last year’s rep. This, and Nimetz’s dedication to performing in every show this season, made her a perfect candidate for the task.

“We really try to give everyone a fair chance. It’s a great opportunity… We all want to see each other succeed, and it really helps grow our community if a bunch of our poets get to go,” Painter said.

And while the points can mean the difference between winning and losing for the poet, they aren’t a reflection of the poetry itself, said Painter.

“That’s why you’ll hear (the host) say ‘applaud the poet, not the points,’” she said. “It’s judging art… Everybody’s different. We have different judges every night, and we really encourage people who have never even been to a slam to do it,” she said.

Though Nimetz has been performing her entire life—dancing as a child, and later graduating from Sheridan College in Musical Theatre—slam poetry has given her something that none of those other performance roles have.

“I really don’t know where I’d be without it. Before Sheridan, and before grad, I thought I’d make it as a musical theatre performer—and part of me hasn’t dismissed that—but now I’ve found an avenue to speak and write my own words,” she said.

When Marc Smith invented slam poetry in the 1980s, his goal was to bring “poetry back to the people,” she said.

“So it’s dynamic, and the competition puts a fire into the performers,” she said.

Despite all of this, the real gem of performing slam poetry, Nimetz said, is not just getting to meet new people, but also getting to hear the personal details of performers’ lives.

“Slam poetry is about speaking your truth… We all have these problems in life, and we’re all in the same boat you know. And we’re just taking our souls, and exploding them on stage.”

Nimetz in performance at the London Music Club