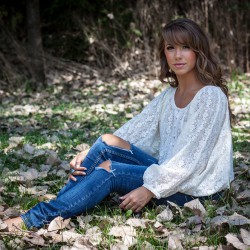 By David Ingram on April 8, 2014 in Transitions

School can be hectic, but imagine trying to become a household name in the Canadian country music scene at the same time.

So it’s understandable if country singer Genevieve Fisher, 21, has been a little stressed out lately as her last term at Western University comes to a close.

“It’s been crazy. I actually overloaded with an extra half course this semester,” she said in an interview. “So it’s a little overwhelming with all the assignments, but it’s almost done.”

Fisher is finishing up her degree in popular music studies at Western’s Don Wright Faculty of Music. Studying music at Western was a natural fit for Fisher, who has shown a talent for singing since she was just a toddler.

And besides learning about music these last few years, Fisher has also been busy making it as well.

Fisher has released a number of singles while enrolled in Western, including Bad Enough  and recently Young in a Small Town, and says even more will come as soon as she finishes school and heads almost immediately back to the recording studio.

“We’ve already got a lot planned, and it’s really exciting, but I think it’s going to be a hectic summer because now that school’s ending I can go full force,” she said.

Many of these new songs she will record are from of a weeklong songwriting trip to Nashville, Tenn., Fisher embarked on before the start of her final term in January. The songs are ready to go, but when her studies started up again, Fisher said she had to reign back a bit on her musical momentum.

“Going to Nashville was such a great feeling, you are sort of on this high, so it was a little difficult getting back to school and into the swing of things,” she said.

Striking that balance between school and her musical career hasn’t always been easy for Fisher, and she admits at times frustration can set it in from opportunities such as recording more songs that were put on hold.

“We would do things, but then they would be sort of be on the backburner, at a standstill, so it’s nice to know that I can now follow through with anything musical that I do,” Fisher said.

But after four years of university she does admit the idea of not heading back to campus after the summer will take some getting used to.

“Right now I’m just so excited to graduate, but I think when September does come it’s going to feel weird not going back to school. So it’s definitely going to be something different for me,” she said.

Looking back on these past four years, Fisher’s choice to earn a degree at Western is certainly not one she regrets.

“I’ve worked so hard on my music career while being a full-time student in university, so it’s just really rewarding to have a degree and be able to accomplish that,” Fisher said.

Fisher says knowing she will always have her degree from Western  provides comfort going forward in this next chapter of her life.

“Just in case if something doesn’t pan out singing, I’m sure it will and I have faith, but I have something to fall back on, so I’m so happy I went to university,” Fisher said.

And if she does move away from her singing career, Fisher says she would definitely choose a career that would incorporate her love for music. 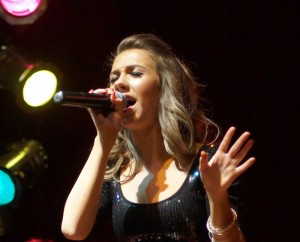 “I would love to work with youth, and maybe going to schools across Ontario in sort of a mentoring program for students specifically through music,” she said.

“Because as a musician I totally believe that music, and this may sound like a cliché, is a really powerful force.”

Her dedication to music will be useful for the hard work it will take to succeed, according Remo DiCesare, Fisher’s musical manager since she was 16. She will need to catch up to other artists her age who typically drop schooling to focus on trying to make it big in country music, he said.

“She has been kind of unique in that way to maintain (school) while still continuing her climb on the country scene,” he said. “But because of school, we certainly had to set our targets to something that was achievable.”

DiCesare also said that this summer will have Fisher heading off for a radio station tour through Nova Scotia and New Brunswick almost immediately after finishing exams, and other shows will be announced soon as well.

These next few months are all part of getting national attention and filling the void for the next big Canadian female country artist, said DiCesare.

He said Fisher has had heavy radio play and has garnered attention from major labels, but to really seal the deal she needs to just get that one elusive hit single.

“So many radio people say she is the total package. She’s got the looks, she’s got the talent, she’s an absolutely superb person when you talk to her personality-wise, and she has a big heart,” he said.

“They are waiting for her to release that song that’s going to do it, and the expectation is that she will,” he said.

Fisher herself knows the work will be hard, but remains both hopeful and humble about getting signed to a label as she pursues her musical career.

“I’m pretty optimistic and pretty open minded about the whole thing. If I get signed I do, and if I don’t then that’s okay because I’m still going to work on it.”