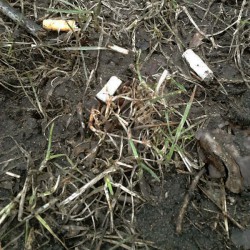 By Patricia Barrett on March 27, 2015 in Community

Imagine picking up soggy cigarette butts people carelessly flick to the ground and making a tally of each one.

Some Londoners make a habit of it. And they’re willing to collect and count more than just butts. Plastic bags, bottle caps, coffee cups and soda cans also form part of the fun.

Each year, they participate in the Great Canadian Shoreline Cleanup  (March 1 – July 31 and August 15 – November 30) to remove tons of litter from the environment.

But cigarette butts are the leader of the litter pack.

“I sometimes wonder if it’s lack of education that causes many smokers to litter their butts without giving it a second thought. It’s astounding how many people who would likely not otherwise drop garbage on the ground see nothing wrong with flicking butts without regard for where they land. It may seem trivial, but it’s not,” wrote David Suzuki in 2013 on his foundation’s website.

“The filter is non-biodegradable,” said Cathy Quinlan, terrestrial biologist for the Upper Thames River Conservation Authority. “And they persist in the environment.”

They can have a deleterious effect on fish and animals, she said.

The Great Canadian Shoreline Cleanup releases a “Dirty Dozen” report each year that tracks the numbers of registrants and sites, itemizes trash and records its weight.

Tonnage seems to have a psychological impact on how we think about trash: when it’s dispersed across a wide area, we don’t notice it as much as we would when we see bags of it.

Although London doesn’t have a shoreline, it has plenty of parks, ravines and riverbanks where litter accumulates and enters the waterways.

The cleanup program was created by the Vancouver Aquarium in 1994 when its staff volunteered to collect garbage from the shoreline near Stanley Park. That provided the spark for people to get involved. In 2002 the aquarium launched a national cleanup program.

“Our main focus is to get people out there and increase awareness of litter issues,” said Debreceni. To date, London, Dorchester and Mount Brydges combined have 40 sites in need of volunteers. Only one, the Thames River between Adelaide Street and Wellington Road, already has a coordinator and volunteers.

The program’s website provides a map of each site across Canada in need of aid. Anyone wanting to serve as a cleanup coordinator can register online. That person, said Debreceni, then must find volunteers.

“It’s open to the person who wants to organize the cleanup and how big they want to make it. They can have a small intimate cleanup with just a handful of people, or they can have a giant cleanup event with 100 people.”

Volunteers get a data card on which to record each item of trash they collect.

“Schools are a key group that we target across the country,” said Debreceni. “They are very receptive to these types of events, as well as a lot of youth groups. Our main ones are Girl Guides and the Scouts.”

Aesthetically, litter is not pleasing. It can also be dangerous, especially plastics, which Debreceni cites as a major problem. Plastic waste makes up 67 per cent of the items on the program’s top 12 pollutants. Plastic bags are dangerous to fish and wildlife.
Photo by Patricia Barrett

Plastic rings can wind their way around the neck of wildlife and slowly choke them to death. Toxic chemicals found in plastics can also affect aquatic plant and animal life, according to environmental literature.

Quinlan said it’s common to see plastic bags along the river. “The smaller pieces are even more dangerous. Some animals  and fish will bite plastic if they think it’s food, and it can get caught in their digestive track.”

Concerns like these get people out picking up other’s trash. Quinlan said people also volunteer for the Thames River Cleanup.

“People want to be affiliated with an event that’s doing good in the world,” said Debreceni. “More and more people are recognizing that we can make changes in our everyday actions.”

To volunteer, visit the Great Canadian Shoreline Cleanup and follow the links on the Take Action page.