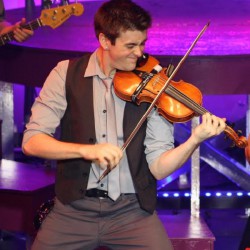 Patios could become more mellow this summer if the city tunes in to its acoustic artists.

London city council is looking to change a bylaw that has stopped restaurants and bars from featuring live music on outdoor patios for the past 20 years.

If this amendment passes, Londoners will be able to enjoy live acoustic music on patios during “reasonable hours.”

The proposed amendment will be discussed at a public participation meeting scheduled for May 13.

So what does this mean for local musicians? David Ussleman hopes to play outdoor gigs in the near future on London patios.
Photo courtesy of David Ussleman

The bylaw change may not improve gig opportunities because it will likely only move acts from indoor stages to outdoor patios, said David Usselman, a local singer-songwriter and guitarist.

“It’s nice, but it’s not going to mean more venues, I would think, because you don’t usually put one person outside and one inside,” Usselman said.

But Usselman is looking forward to the change in scenery because he remembers playing on patios in Strathroy, where it is allowed.

“I think it would be really cool because music on patios just creates a really nice atmosphere downtown and brings more people in,” Usselman said. “So that’s really exciting.”

And bringing more people into venues may be the key to a successful bylaw change.

It could also create more long-term opportunities for local musicians by fostering a greater enthusiasm for live music in London, said Jesse Grandmont, a local violinist.

“I think it’s ridiculous that we don’t get to have music on patios,” Grandmont said, “I mean it’s so stupid.”

While visiting friends in Niagara Falls, Grandmont noticed that every patio had a schedule of rotating performers, which created more opportunities for local acts. He added that a lot of musicians he knows are experiencing a shortage of gigs. Allowing for live music on patios might promote the same success in London that performers and venues have enjoyed in Niagara Falls, Grandmont said.

“London is so open during the summer,” Grandmont said. “It’s always great to hear someone playing when you’re walking down Richmond Row, and it’s great for bar owners because it draws people in.”

The bylaw was intended to prevent disturbing the neighbourhoods surrounding taverns and eateries, but Grandmont pointed out bar patios are already playing recorded music loud enough to be heard clearly from the street.

“They’re allowed to pump the radio that loud, but not to do it live? There’s really no reason why places couldn’t have plugged-in music,” Grandmont said.

For this reason, he thinks the possible bylaw amendment is a good start, but doesn’t account for the potential patios could have if the city allowed amplified music.