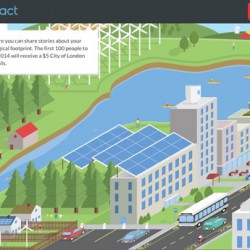 London is looking to hear how you conserve energy and hopes you’ll help others do the same.

That’s the idea behind a new website launched by the City of London. Known as reduceimpact.ca, the site encourages citizens to share the steps they take to reduce the amount of energy they use.

People can enter a postal code and an interactive map will display where each person who shared his or her story is located in the city.

Each suggestion, like switching to energy efficient light bulbs or walking to work, is listed in hopes of motivating further energy reducing actions, said Jamie Skimming, manager of air quality for the city and part of the environmental programs group. 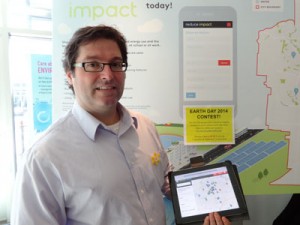 Jamie Skimming holds up a tablet showing an interactive map from reduceimpact.ca.
Photo by David Ingram

Not only can Londoners share what steps they take to reduce their energy use, but they can also get paid to do it too.

In anticipation of Earth Day, the city is holding a contest. The first 100 individual residents to share their stories using the online tool by April 22 will be able to earn a $5 City of London gift card.

“We’re treating this contest almost like a test to see if incentives like this may be enough of a nudge to get people into action and have them share their stories with the rest of the city,” said Skimming.

And it’s not just the web where these stores can be traded.

Skimming and others also devote their time towards another environment-themed pilot project called CityGreen at downtown London’s CitiPlaza.

CityGreen is an interactive display, where educational information about the environment is made available to the public, including details about reduceimpact.ca.

“We have all this information on our websites, but we asked what would happen if we actually physically put it in a storefront and see if it would actually draw people in?” Skimming said.

“Having something physical to look at really grabs peoples’ attention,” he added.

Dustin Boam, 25, stopped by CityGreen to chat with Skimming about the city’s environmental policy.

Boam took a special interest towards composting and wanted to know how the city planned to help people divert organic waste away from landfills and towards creating renewable energy. 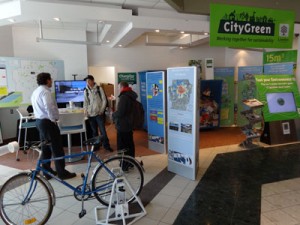 Jamie Skimming talks to Londoners about the city’s environmental strategy at the CityGreen space.
Photo by David Ingram

“I’d like to see a green bin system put in place. I know Toronto has one and because I live in an apartment, composting at home isn’t really practical for me,” he said.

But Boam’s apartment faces south, so most of his heating actually comes in from the sun, he said.

Collecting individual stories like Boam’s and using spaces like CityGreen has been crucial for drafting London’s environmental strategy, Skimming said.

Skimming and his team plan to submit a finalized environmental plan filled with citizen input, called the Community Energy Action Plan, to city council for approval later in the spring.

“But lots of stuff that are in the draft plan we are already starting to do. The common sense, no-brainer stuff like (reduceimpact.ca) we already have out the door,” he said.

“It just makes sense anyway to charge ahead because it’s a smart thing to do.”