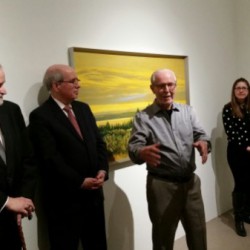 Standing solitary, surrounded by sculptures, is a tiny brick building on the Western University campus.

Unremarkable but for the bright red double doors, the McIntosh gallery has hosted internationally renowned works of art and played a key part in building up London’s cultural landscape.

Established in 1942, the gallery is the oldest university art gallery in Ontario. But it wasn’t until Maurice Stubbs was hired as curator in 1969 that the gallery was set on a path that made it what it is today.

Stubbs curated the McIntosh until his retirement in 1989. Thursday he returned for the opening night of “Primary Forces,” an exhibit of his own post-retirement art.

“Ever since he retired his colour palette has just exploded and he has been travelling all over Canada in order to look at and record the landscape,” said curator Catherine Elliot Shaw.

His oil and watercolour landscapes are very sought-after, she explained. Looking around at them, it’s not hard to see why.

The landscapes convey movement, be it wind in the trees or water flowing. The few watercolours that employ neutral colours have glimmers of yellow or blue poking through. He has an aptitude for capturing the magical moment when a few of the sun’s rays poke through a cloudy sky. His oil landscapes appear fantastical due to his bold use of colour.

“I was really taken by this piece just because of the way he depicts the underwater life. I see gears and stuff, which references almost like a mechanical aspect to it,” she said. ”I think it’s an interesting vibrancy compared to the watercolour stuff that he’s done.”

After learning Stubbs was integral in establishing the gallery as it is today, Adlington found his work even more inspiring.

The work Stubbs did while he was at McIntosh was integral to the development of the city’s cultural identity said many patrons throughout the night. Stubbs recounted the first thing he did when he was hired was catalogue all the artwork in the university’s private collection.

“Because at this point people were saying “Oh it’s my painting, I’m going to take it home,” he explained.

Stubbs worked diligently with the help of assistant curator at the time, Dan Miller.

“Maurice was relentless in getting the program launched and documented,” said Miller in a speech during the opening. “We did search and rescue in many pieces of artwork around the campus, all over the Western buildings. We were finding things behind sofas and file cabinets . . . it was really quite a fascinating experience.”

Miller and Stubbs also fought to have the iconic red doors. At the time, all the doors at the university were painted black, said Miller.

“We wanted to create an identity for the McIntosh so we would stand out on campus,” he explained. Miller helped create that identity with a campus radio show alongside local artist Wyn Geleynse called “Behind the Red Door.”

This identity extended past the campus and into London’s cultural landscape said Tom Smart, who was assistant curator in the 1980s.

“I hope in the future that people will come and say yes, he was an important part in the development of the national culture here in London, Ontario,” said Smart. “He’s given us these fabulous emblems of consciousness, of memory and how we can become what we see and feel in a very deep and creative way.”

For Stubbs, he says he just did what had to be done to make the gallery a viable place for artists.

His legacy has left a deep impression on London’s art scene, but Stubbs is humble as ever.

“The first time I showed at the McIntosh was when I was working downtown at the public gallery. I was asked to have a show by resident artist, who was Bill Roberts,” said Stubbs. “So Bill and I put this show up and nobody came, [so] it’s nice we got a few people here this time.”