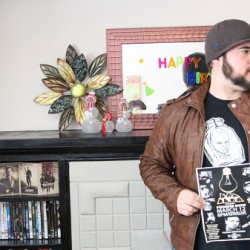 A man with a slim build, long blond hair and a full beard took the stage at London’s Roxbury Pub and Grill last year. He grabbed the microphone in front of a brick wall with an Alexander Keith’s logo painted on it and said the first joke of his career.

“You guys can probably tell just by looking at me that I’m the outdoorsy type. And by outdoorsy, I do mean homeless.”

With this joke, comedian Jason Allen began his winning routine in a contest run by the now defunct Offenders of Comedy. He will return to the Roxbury (on Oxford Street west of Highbury Avenue) on March 12 and perform at the premier show of Bad Idea Comedy, a new forum for underground comics to hone their skills.

After the closing of the Big League Comedy club downtown in 2012, the London laugh scene lost a hub for developing new talent and a rare source of steady work. With a lack of venues and a Yuk Yuks branch that often ignores the local scene, London can be a hard city to be funny in, said Matt Ker, a former Offenders member and Bad Idea’s co-founder.

“It’s a conservative city, man,” Ker said, “especially when your group name is the Offenders of Comedy.”

But it’s starting to get easier, and underground groups like Bad Idea aim to help the scene bloom. Jason Allen in the middle of his set in London.Photo courtesy of Jason Allen.

“Comedy in London is very much a punk rock thing where it’s a do-it-yourself kind of style right now,” Allen said. “Comedians are finding themselves work; it’s not clubs that are booking comedians.”

Before the Offenders parted ways in January, they held open mic nights and contests to give local comics and newcomers a stage, Ker said. Co-founder Kellen De Vos agreed with Ker on this mission and suggested starting Bad Idea Comedy as a sister brand to his hip-hop record label, Bad Idea Records.

The label’s name is a spin on the joke that everything De Vos and his collaborators rap is a bad idea, so the comedy brand will provide a platform where comedians can experiment with their material, De Vos said.

“Comedians bomb a lot, especially in the underground where they’re just coming up,” De Vos said. “Even if it’s not funny, sometimes you just have bad ideas and you have to get through that before you can get to the gold.”

But for the première, Ker intends to start the brand with a bang.

He handpicked the show’s roster from a list of people he has worked with and said he has brought together “the best of the best,” which includes a guest headliner from Toronto named Francis Brian Shaw. He has performed over 150 shows in his native Vancouver. Ker plans to stage shows on the second Wednesday of every month.

Bad Idea Comedy is also planning a web series that will feature a segment called Bad Time Stories, where comedians will talk about their worst experiences in the style of bedtime stories, Ker said.

As for London’s comedy scene, change is already in the air. Venues were mostly limited to Yuk Yuks’ and Offenders’ events a year ago, Ker said. But now Bad Idea will share a scene with events hosted by Doctor Feelfunny, who arranged for Gilbert Gottfried to perform in London last year, and an amateur night at the APK Lounge hosted by Pat Tiffin, a London comedian who will also perform at Bad Idea’s premier show.

Other London comedians are contributing to the scene through web projects such as Peter Reed’s apartment comedy show and a podcast hosted by Matt De Vincenzo—who goes by Lunchbox—and Paul Michael Anderson called the Podfellas, said Allen.

“Every comedian helps in their own way,” Allen said. “The scene is definitely growing and the passion is there.”  Allen and De Vos agree that the scene will get bigger and stronger if more young performers and audiences hear about it.

“It would be great for a lot more young people to see there’s a lot more avenues to check out than the Richmond Row club scene,” De Vos said. “That’s fun, but I think there’s people out there that want to experiment with their own creativity.”