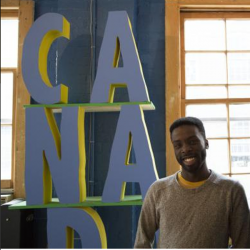 Desmond Cole, host of a self-titled show on News Talk 1010, was caught during a phone interview in the middle of some very important work.

“I feel I would say perpetually disorganized,” he said. “I’m sitting at my computer imagining how much more organized I can be: it’s been a very productive afternoon.”

Cole is the epitome of an online journalist. He works from home, writing columns and promoting his own work through social media. Everything he produces, even for print, ends up online.

He appreciates the opportunities that creating content for online provides for his work to be seen – or heard – by a large audience.

“You’ve got people out there that like my work that I wouldn’t have been able to reach otherwise,” Cole said. “A lot of people might miss my show, but I’m able to refer them to the podcast and they can find it on their own time, which I love.”

However, Cole still has an undeniable love for the thrill of live broadcast radio.

“There’s something of a different quality that I find so enjoyable and compelling,” he said. “You can’t experience the same feel of unfolding events through a podcast as you do on live radio. There’s no way to capture it other than live.”

Cole agrees that podcasts are the new form of radio and they are a great way to take in information. His upcoming show begins in May on CANANALAND and is called COMMONS. The show is a politics podcast that doesn’t take the structure of current political shows.

“I recognize how much of a turn off it is to people who say this is not for me and they’re not speaking about anything I care about,” he said.

The show is focused on broadening the discussion to people, not staying inside the House of Commons and commenting on political jargon about new legislation, he said. The aim is to ask more basic questions about what is means to be Canadian and how change to our current system can make this a better place for all citizens.

Social justice issues are something Cole is familiar with. Through his daily routine, which is always varied, he looks for ideas for stories. He often attracted to stories where people aren’t being treated with human dignity.

“I write endlessly about the issue of policing in Toronto and how it effects people of different racial backgrounds differently. Because I am a black man I face real and consistent discrimination from police everywhere I go,” he said.

And that gives him the power to write. Emotion is one of the keys that compels Cole to continue to do the work he feels passionate about. He finds that lack of opinion is one central flaw in journalism.

“I actually think that one of the things that’s wrong with journalism is this false notion of objectivity,” he said. “Not only does that notion discourage journalists from having opinions on things that they report on – which I think good journalists ought to – and expressing those opinions at the appropriate time.”

When someone is reporting on an issue that affects a certain group of people and they are not of that background, they are just talking heads, he said. Cole found himself laughing when he read an article from Jeffery Simpson of the Globe and Mail. Simpson described himself as an expert in aboriginal issues.

“Like what the hell are you talking about? Whatever expertise he claims to have is nothing compared to the lived experience of one indigenous person,” Cole said.

Frustrated with Canadian media, he feels that the new politics show may be able to start changing the way of future media organization’s practices. Freelancing is a great opportunity to find voices that aren’t being represented as well as they could be, he said.

Cole is a freelance contributor for Toronto Life magazine, and is also going to be featured on the cover of the new issue.

The magazine’s publisher Ken Hunt is also the publisher of the Torontoist, where the two worked together. Hunt is pleased with the journalistic fairness Cole presents in his work.

“He listens to the other side, he never gets heated in any exchange he’s been in. and he really takes the tone of an educator on all of these issues,” he said. “I can tell you that ever since he became involved with Torontoist I’ve been thoroughly impressed with his energy and his insight.”

Cole’s energy is transferred to his shows. He doesn’t even feel like he needs to push himself to work, he said.

Hoping to always evolve and change the face of Canadian media, Cole wisely chose the introductory music to his radio show: Busta Rhymes’ Break Ya Neck.

Kaleigh Rogers: A day in the life of New York’s finest online journalist
NHL playoffs a busy time: for some more than others