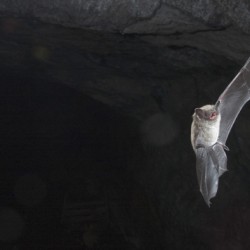 Long considered scary and carriers of diseases by many, bats are falling victim to a disease they can’t battle.

Their populations are being decimated in North America since a disease called white-nose syndrome arrived in New York in 2006 from Europe. It made its way to eastern Canada in 2010, and since then it has been spreading rapidly, though it has not affected bats in western Canada yet.

Fenton gave a lecture on bats to a rapt audience in Wolf Performance Hall in early February. The event was organized by Nature in the City, and Fenton sought to inspire interest in bats and correct misconceptions.

“Bats are just totally fascinating from one end to the other,” he said in an interview before the presentation, his face lighting up. “There are just so many things that are amazing.”

But these “fascinating” mammals are at risk of being extirpated (extinct in a specific area) because of white-nose, which kills bats primarily by affecting their hibernation pattern. The disease is named for the distinctive white fungal patch it leaves on the face of the affected bat.

Typically during hibernation, bats will go 60 days without waking up, explains Fenton. “What white-nose does is interrupt the rhythm… So instead of waking up every 60 days, they wake up every day. And every time they wake up they burn up a lot of fuel.”

With all that fuel being burned, bats run out of fat and energy before the winter is over. “By this time of year, bats with white-nose are either dead, or about to be,” says Fenton.

By 2012, an estimated 5.7 to 6.7 million bats had died of white-nose syndrome in northeastern US and Canada, says Lucas Greville, a master’s student at McMaster University who studies hormone transfers in big  brown bats. At any given location in caves, up to 97 to 99 per cent of bats have disappeared since white-nose arrived, says Greville.

White-nose spreads by bat-to-bat contact and since bats are sociable it spreads quickly. Once a bat has the disease, it stands little chance of survival because the fungus thrives in cold environments like the caves bats hibernate in, says Greville. The result is deadly.

It’s happening close to home. “There used to be a big colony of little brown bats in Benmiller (90 minutes northwest of London) in an old baseball clubhouse. And that population has gone from having three to 400 to probably 20,” says Fenton. In other areas in Ontario, little bat populations have declined from as much as 30,000 to less than 500.

“You go into these hibernation sites and there are literally thousands of dead bats lying all over the place,” says Fenton. Though this has not been seen in southwestern Ontario, which has no caves or mines, Fenton says there are probably still fewer bats in this area.

And the lack of bats in the region is felt even in London, where downtown resident Abbey Goodine says she has noticed “a decrease outside and more bugs because of it.”

This is a consequence that will only be felt more strongly as the bat population continues to dwindle, adds Greville.

“A lot of people don’t realize bats have huge agricultural significance across North America,” says Greville. “They estimate that bats will eat about 700 tons of insects a year and that saves the farming industry about $3.7 billion of pesticides a year. So there are major economic and agricultural implications that people really don’t realize.”

So what’s the solution? There are labs working to find a cure, but so far they haven’t come up with anything. And Greville says that even if a cure can be implemented before the fungus spreads to western Canada, the bat population in eastern Canada will never, at least not in our lifetime, return to its 2006 levels.

“Bats will typically give birth to one pup a year, sometimes twins, so with the number of bats that are dying off, it’s unlikely that the population will ever get back to where it was five  or six years ago.”

Bringing up baby: dads seek parental leave
Out on a Limb