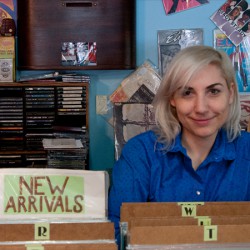 By Mason Joseph Zimmer on April 8, 2014 in Transitions

Gently strumming her acoustic guitar, she sways back and forth to her own beat.

“I know you can’t breathe,” she sings, high and soft. Many of the songs she’s shared tonight are familiar, and Olenka sings them powerfully alongside members of her band, the Autumn Lovers.

But this one, Asthma, is new. She’s planning to put it on a future album. And right now, she stands alone, singing delicately. The audience is silent. Her face reddens as the tears start to win.

The song ends and the audience roars and applauds together. Everyone stands.

This is the scene of Olenka’s Au Revoir show on March 14 at the Aeolian Hall. Here, she showed her fans a peek at a distant new beginning in her musical development while staring down an immediate one. After six years of breaking into London’s music scene with an eclectic blend of Polish traditional folk music and country music, she was poised to begin a journey back to her hometown, Vancouver.

When she first came to London in 2005, Alexandra Krakus intended to focus on getting her PhD in English literature at Western University while keeping her music in the background, she said. But discovering London’s active and receptive music scene compelled her to bring her songs and her nickname, Olenka, to the forefront.

“It’s kind of like London is this surprising little incubator,” Olenka said about the talent of local artists. “People don’t realize that there’s so much of value here. But it’s there and it’s quite broad in genre and in appeal.”

After she and the band came together in 2008, they hatched an egg of their own with Warsaw Girl, a record rooted in the sound and memories of Olenka’s Polish heritage.

And at the Aeolian Hall, approximately 300 people in that incubator returned her affections.

Among them was Darin Addison, the artistic director of the Home County Music and Art Festival and her former publicist, who introduced her set.

“Mama Krakus is very excited to have her back home,” Addison said, choking up.

One of the artists who shared the stage with her at Au Revoir was Simon Larochette, an Autumn Lover who also runs a local recording studio called the The Sugar Shack. Before he came on stage, Olenka credited him with paying for their 2010 release, And Now We Sing.

“I was working a lot and it was money in the bank so it was no big deal to help someone out,” Larochette said.

“It was stressful because we weren’t playing with the rest of the band,” Larochette said, “but it was comfortable and it felt like it should have felt.”

Four days after the show, Olenka worked her last shift at the Village Idiot record store and autographed albums for friends and fans who dropped in. She stood among an array of classic rock posters hanging on the store’s blue walls and revealed why she was leaving. 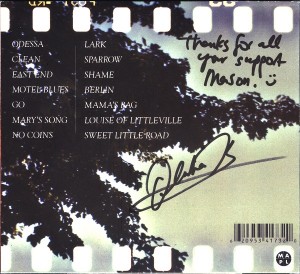 It started with her boyfriend and collaborator, Jeffrey Moon, accepting an internship in Vancouver. From a practical standpoint, she’s joining him and reuniting with her old friends and family, Olenka said.

But there’s more to it than that. While leaving the community is a sad experience, Olenka also sees an artistic opportunity in uprooting.

“The thing that I’m coming to really accept and understand is that you need to shake up your life sometimes in order to move forward artistically,” Olenka said.

“Without those sorts of dramatic shifts I think artists succumb, ultimately to compromise, but to comfort. That’s the sort of experience that can make you not enjoy art because you get kind of stuck in the same old, same old.”

She added that she could still make good music if she stayed, but doubted her music would be as challenging to herself or her audience.

But one challenge that may be waiting for her back in Vancouver is the lay of the music scene. She said she and others remember it as a combative scene made up of small cliques with little interest in collaboration.

She added her approach in going back is to draw upon the sense of community she experienced in London and try to find a similar sense of it among the Vancouver people  she considers warm, kind and hard-working.

But she has no intention of trying to unilaterally change the scene.

“If I have any sort of recognition that might shed some light on certain community efforts out there, then great,” Olenka said. 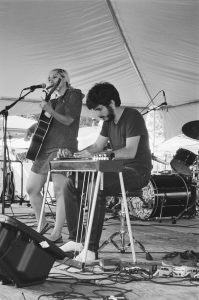 “I will be happy to help that out, but I think it would be arrogant to presume that I could go into that space and just be like ‘I’m coming in to change stuff. Shake shit up, yeah!’ No, no I’m going to go there and see what people are doing and be inspired in the same way that I’ve felt here.”

As for what she’s going to do when she reaches Vancouver, Olenka laughed and said she’ll wing it.

“That’s been my plan for, oh, 10 years. I think if you’re going to survive in life, that has to be part of your methodology,” she said.

She added that she has some vague ideas about writing and imagining the themes and form of her next album while linking up with friends and potential collaborators. But before that, she’ll take about a week to rest.

She also promised at the Au Revoir show that she will return to London on her next tour. Addison said London will be ready when she does.

“Olenka is a musical force,” he said. “Even though she is leaving London, her presence will continue to be felt.”

And, while customers chatted in the Village Idiot as she worked her final shift, she shared some final thoughts about the concept of her move as a transition.

“I think when you think transition there’s like a slow sort of progress, a slow re-entry into comfort and that’s not how I want to experience this,” she said.

“This is kind of traumatic. This is scary and it’s big and it needs to be, because without that I won’t have the kick to the pants or that sort of electricity that’s necessary for you to pursue new things and just really change.”