The venue’s management grew concerned when the Missouri grunge rockers failed to arrive for their 5 p.m. sound check, and proceeded to phone their hotel.

When they finally made contact with the group’s members, who were apparently unaware of their tardiness, they left for the bar.

“He wasn’t even able to function properly. At all,” she said.

A short while after arriving, the band left again without saying anything to Norma Jean’s management, returning to their hotel.

The staff was confused and tried reaching out to the band again. They then received word that the group were indeed on their way once more. They went on to set up the venue’s green room with the amenities requested on the band’s contract rider.

Despite this, and having already been paid more than half their fee as a deposit, the band never did arrive. The employee was unsure whether or not another call was made to the venue to finalize the cancellation.

“We didn’t do anything to piss them off, there was no miscommunication on anything,” she said.

Venue management, upset by the night’s events, took to Facebook to voice their displeasure. 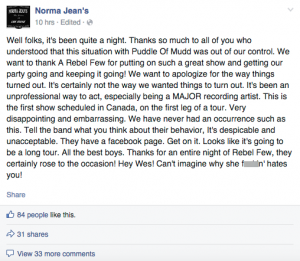 Scantlin has a history of encounters with the law and has been charged with public intoxication and disorderly conduct while intoxicated in the past.

While opening act Rebel Few played an extended set to entertain the displeased fans, according to one staff member, there were concerns about the growing resentment amongst the crowd.

“It just went crazy last night, we were afraid of a riot,” she said.

Some fans took to Twitter to convey their frustration with the bands actions.

Others, including Londoner Kelly Currie, got a little more creative with their criticism…

Currie, who plays in a band himself, said the lack of professionalism from a band he loved during his teens and had looked forward to seeing again was quite disheartening.

“They had some people coming in from out of town, you know,” he said. “It’s a bummer.”

Norma Jean’s has not yet received a refund from the band, but are themselves offering a full refund to anyone who purchased a ticket for last night’s show.

Last night’s show would have been the first on the Canadian leg of Puddle of Mudd’s tour and the cancellation is causing speculation about the status of the remaining shows.

The next scheduled show is tonight at the Bourbon Room in Ottawa.