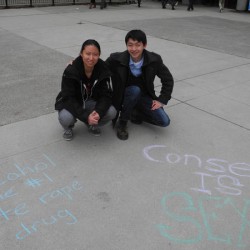 Jenny didn’t scream. She didn’t call out for help, and she didn’t try to fight back. Instead, she just lay there–passive and non-resistant. While in some part of her mind, she might have known what was happening, she didn’t have the strength or the words to speak what she was feeling. She isn’t sure that anyone would have helped her anyway. Jenny didn’t know it was rape. Jenny…was drunk.

What is consensual, and what is not consensual in sexual situations is blurry at times. In Jenny’s case, a night of alcohol and partying contributed to an unclear picture of what consent really meant, and she was left both traumatized and confused. Organizations like I Know Someone (IKS) at Western University, together with the Sexual Assault Centre London (SACL), are aware of this problem, and hope to prevent sexual assaults by reinforcing a stronger definition of consent.

“We really push for an enthusiastic yes,” said Danielle DeBlock, who works with SACL. “So yes isn’t maybe, and it isn’t just not responding.

“Perpetrators don’t necessarily know the difference between what’s okay, and what’s not okay, because of the culture we live in,” said DeBlock. “If someone is fed images of male domination, and no female images of that, it’s a lot harder to know what consent is,” she said. 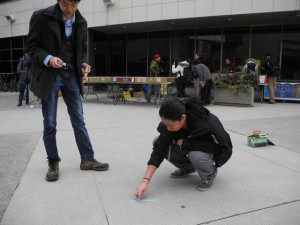 A lot of SACL’s training focuses on “rape culture” awareness. Rigid gender norms and social values contribute to embedded ideas of rape as acceptable, and ultimately encourages sexual assaults, she said. “We are fed images of it every day. We have rape jokes that are still funny, and Dolce and Gabana ads that basically show gang rape scenes.”

While Jenny doesn’t think of her assailant’s behaviour as conforming to gender stereotypes, she has always believed there was a lack of communication, on both her part, and his. She knows what her assailant did was wrong, yet she’s always felt it reflected a larger problem—a social issue. She remembers saying “no” at some point because she remembers being frightened by the look he gave her. He just stayed there, lying on top of her, staring down at her. At the time, she thought it was a look of resentment, but it may have been pure confusion in the end, she said.

While she certainly never uttered an enthusiastic yes, she feels being a young drunk girl at a high school party was probably enough of a social cue to her assailant to make his move towards her. There was no consent needed, however mistaken that truly was, she said.

Organizations like SACL and IKS are trying to address gaps such as the one Jenny experienced—gaps that show a disconnect between what someone might think is happening, and what is really happening, and when social cues are misinterpreted.  While SACL and IKS routinely train sophomores and residence advisers on how to respond to disclosures of sexual assault, they also offer workshops on consent that are open to everyone.

“We have healthy discussions about what consent is, and what kinds of things someone can say to ensure they are practising consent or doing exercises to make sure they’re establishing consent,” said Myuri Komagiri, the vice-president of campus issues. She oversees IKS’s work, and has been pushing this year for more awareness about sexual violence in general. The University Students’ Council held its first sexual violence awareness week in October and a sexual assault website was also launched, she said.

Because sexual violence is a broad spectrum, prevention efforts extend to everyone, and it helps to have other people enlightened about what consent does and does not mean, according to Komagiri. “If you look at the larger slogan, it’s I Know Someone that has been Affected by Sexual Violence,” she said. “There’s been a cultural shift, and we’re taking a look at what everyone can do when solving this problem.” 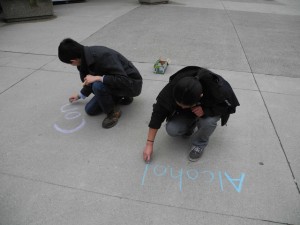 Jessica Tong and Alex Lu have been volunteers with I Know Someone since September.
Photo by Andrea Smith.

A campaign she brought in this year, called “Draw the Line,” highlighted this issue by asking people the question “What do you do if you are out at a bar dancing, and a drunk friend stumbles out of the bar with another guy?” The question to the dancing friend is “Where do you draw the line?” In other words, at what point is someone too drunk to know what they are doing, and at what point can, and should, a friend intervene in order to prevent a sexual assault.

An even more progressive approach to sexual assault on behalf of IKS and SACL is to include the perpetrator in the discussion. This year during St. Patrick’s Day, IKS campaigned for a Safe-Patrick’s Day. They handed out wallet-sized cards with tips to help potential perpetrators realize how their behavior might lead to a sexual assault, and how to stop before they cross the line.

She admits it might be overly sympathetic, but she feels educating perpetrators about their actions might be a better approach than locking them up, at least in cases where they sincerely felt they received mixed messages.

As for victims like Jenny, she wishes that someone had been there to educate her about consent, she said. She was at a party the night of her assault–with casual friends and some not-so-friendly faces. Her would-be assailant had been feeding her shots of vodka, which she acknowledges she didn’t have to take, but she honestly didn’t believe his intentions were so dishonourable.

Jenny was only 15 at the time, and while she felt old, looking back she wasn’t, she said. She was still a child and so naive. She felt so alone at the party that the attention from the older guy was flattering to her. But she never intended to have sex with him—she had never had sex with anyone before, and that was certainly not going to be the night she lost her virginity. She hadn’t even shaved her legs for God’s sake, she said.

Everything was fuzzy to Jenny in the morning, except that awful, raw aching feeling in her gut. She attributes that mostly to guilt, and shame, and the unmistakeable soreness from being penetrated for the first time. Confused about what to do following her assault, and what the law would say, Jenny stayed mute. She swallowed her pain for almost 12 years, she said.

While the methods that IKS and SACL are using to educate the public are valuable, there are still misconceptions about sexual assault laws, and the legal interpretations of consent. Some cases are black and white, but others are not so easily discernible. 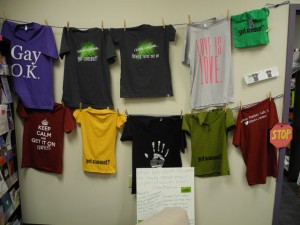 Consent awareness t-shirts from I Know Someone line the wall in the Peer Support office beneath the UCC.
Photo by Andrea Smith.

Phil Millar, a lawyer practising in London, said that he is surprised more people don’t know about the onus on the man (or the assailant) to establish consent. “Consent has to be absolutely clear. You have to say, ‘Are you okay with this,’ and if she doesn’t say that… if she’s just kind of groaning, then that’s not enough,” said Millar. If there is any doubt about the capacity of someone to consent, then the other person has to get it, or stop what they are doing, he said.

The problem is that winning can be very difficult in sexual assault cases, so victims don’t always come forward, said Millar. “Because the women are drunk, it’s tough to prosecute if you don’t have a good memory… It puts everything into question,” he said.

Further, a person can’t consent if they’re asleep, said Det. Tia Sutherland, a sexual assault investigator for the London Police Service. “If a female says she was asleep and woke up, and somebody was having sex with her, that’s not that challenging to us to investigate.”

Sutherland says she has more difficulty investigating cases in which women don’t remember what happened the night before. She often has to talk to the people who were with the victim, or go to the places the victim was to determine what state they were in before the assault occurred.

And sometimes she finds that while a woman didn’t necessarily like what was happening to her, she didn’t verbalize her feelings. Those cases get dropped unless there is a good reason for the woman remaining quiet, such as fear, or having experienced previous abuse, said Sutherland.

But nowhere does it say that because someone is intoxicated, they deserve to be sexually assaulted, said Sutherland. “Just because I’m a girl and I’m out with my friends, and I consume two more drinks, doesn’t mean that somebody gets to take advantage of me.”

IKS and SACL’s emphasis on giving and receiving an ‘enthusiastic yes’ in response to sexual invitations, can also bring to light these necessary distinctions between what is consensual and what is not consensual. By teaching potential victims to speak up, and teaching potential perpetrators to get a real response–rather than accept a maybe, or overlook certain responses altogether–they can ensure both parties are aware of, and comfortable with, what is happening. 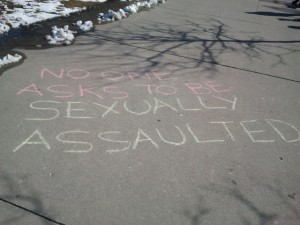 Volunteers of I Know Someone leave messages behind in Victoria Park after a Safe-Patrick’s Day campaign.
Photo by Andrea Smith.

This comes as a relief to Jenny, who has lived with her pain for a long time. She internalized her feelings from the moment she figured out what had happened to her, and didn’t let them out until just a few years ago. Her shame and her guilt plagued her, and she loathed her body for years because of how awful and violated it felt, she said.

“The truth is, we need these programs in high schools, and not just universities,” she said. “If that had been the case, it might have saved me years of agony, self-abuse, dysfunctional relationships, family problems, and all the trouble I had sitting in school after that—sitting in classrooms, when I just felt sick to my stomach all the time… knowing I would eventually run into him in the hallway…”

The Russians are (still) coming!
NHL’s biggest comeback… the fans!