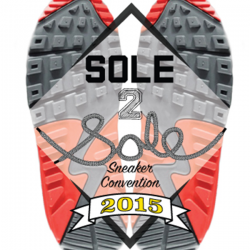 Pump up your Reebok’s and lace up your Air Jordan’s.

Sole2Sole is London’s first-ever sneaker convention. The hip-hop influenced affair aims to bring together a community of like-minded people: those with fresh rubber sole on their mind.

“I’m just a really big sneaker head and into the culture,” J.R. Wideman, the host and organizer for the event said. “It’s an idea my friends and I had last year and thought now it was time to execute it.”

Wideman aims to bring the community together in another fashion. Admission fees will be waived if patrons donate a pair of lightly used sneakers.

Proceeds will go to Crouch Neighbourhood Resource Center who will be distributing the shoes to youth and young adults around London, Wideman said.

“We’re not just giving them all these shoes and saying, ‘here you go!’ We want to follow up at some point and see these kids wearing these shoes out, seeing them smile, and get excited about getting a new pair of sneakers.”

And even if the kicks aren’t in perfect condition, the organizers will be cleaning them up at the event, he said.

Along with merchandise from vendors such as Steelo and The Jump Off, Sole2Sole will also feature a breakdancing battle, DJ sets, rap performances and more.

Attendees will be able to buy, sell or trade shoes in whatever way they see fit. And if people want to come by to look around there is no pressure to participate in exchanges, Wideman said.

This event is something London has never seen before and the inspiration comes from Wideman’s familiarity with the Toronto fashion scene.

“No one outside the GTA is doing an event like this. But that doesn’t mean there isn’t a need for this sense of culture here. We are excited to see how it plays out,” he said.

Sole2Sole takes place Saturday at Hideaway on Richmond St. from 2 p.m. until 8 p.m.

Admission is $20 at the door or free with donation.

With over 200 confirmed guests on Facebook and several responses from people residing in Detroit, MI, Wideman anticipates a good turnout.

He encourages everyone to lace up their best pair of kicks.

“I love my Jordan’s but I’m actually still undecided on what I’m going to wear. There are too many choices.”