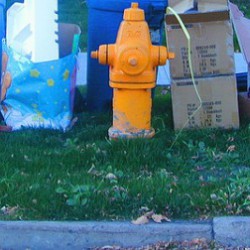 Every year on April 30, the streets of London’s student neighborhoods are transformed into garbage dumps.

That’s because unwanted furniture, appliances, clothing and other assorted junk is left behind in front of vacated rental houses.

You can practically set your clock by it.

And Western’s student government says they’re fed up with the yearly trash-heap tradition.

This year, they’re going to do something about it.

The solution? “Western’s move-out clean-up,” a two-day junk-collection initiative taking place this year on April 28 and 29 organized by the University Students’ Council.

The USC is encouraging students to drop off unwanted small appliances, clothing, e-waste (like old TVs, phones and other electronics) and non-perishable food at the parking lot of the Ceeps (671 Richmond St.), one of London’s oldest student pubs.

The donations will be collected by Goodwill, the City of London, and the London Food Bank. Furniture will not be collected.

The idea has been important to USC president Matt Helfand since before his election. He said it all started two years ago, when he was in fourth year.

“I looked around during the move-out days, and I noticed how much garbage was being thrown out that was not being appropriately put in the trash,” he said.

So Helfand “took to Twitter,” and before long the now-defunct Metro London newspaper picked up the story, and put him on the front page the next day.

“It showed me that this is something that people are concerned about and notice,” Helfand said.

The majority of the costs of the event are being covered by a $1,000 grant from Awesome London, which was approved last year, Helfand said. Awesome London is an organization that gives out $1,000 grants to fund ideas that would make London better.

Helfand wasn’t the only one who noticed the junk piling up. When the USC contacted the manager of the Ceeps, Colin Tattersall, late last year, he said he was happy to help.

“When the students leave, there’s obviously a ton left behind on the streets, all around Richmond and up by the university,” Tattersall said. “Anything that also helps the community is a great thing to do.”

Tattersall said for students who drop off donations, the Ceeps is offering coupons for 20 per cent off food orders on their perpetually packed patio for the month of May.

Because they’ve started promoting the event early – most students are gearing up for final exams and wouldn’t otherwise be thinking of move-out plans – Helfand hopes to have a good turnout.

“It’s very hard to say what it’s going to be, since it’s a pilot,” he said. “But I do think students will be willing to walk a couple blocks to do the conscientious thing.”

Coming out for coffee, conversation, and support
Relay for Life coming to London this spring