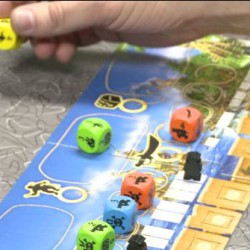 Board game enthusiasts can snake (and ladder) their way through the city for the second-annual London Game Crawl on Saturday.

The game crawl is held in honour of International Tabletop Day, an annual celebration of all things related to board games.  Last year, 80 countries participated and hosted gaming events around the world.

In London, eight locations including Uber Cool Stuff, L.A. Mood, and the central London library branch will be holding tournaments, demonstrations, and giveaways. 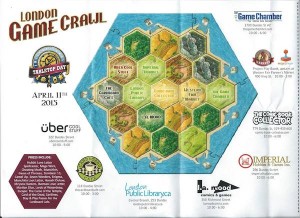 This will be the first game crawl for The Cardboard Cafe, London’s gaming cafe that opened late last year.  Gamers can stay and play with any of the 300 games available in the cafe’s library for free until 3 P.M.

“We’ve got a couple people in to set up games and show people around, and basically to introduce board games to more people, and get that medium out there,” said Regine Li, an employee at The Cardboard Cafe.

Canadian game designer Josh Rivers will also be at the cafe, demonstrating his game Khrysos Hunters.

While games might seem like child’s play, the game crawl is for all ages – including kids at heart.  Li says more adults have been getting into board games because of the social element it provides.

“I like the social aspect of it..and of course you get to meet a lot of people at competitions and it really shows how big the scene is getting,” she said.
The crawl is not just about fun and games either.  This year, businesses including The Cardboard Cafe will be collecting board games to donate to My Sister’s Place, a local women’s shelter.  Li says so far, the response to the drive has been positive and people have been supporting the campaign. 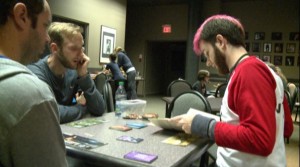 Participants can pop in to as many locations around the city as they want, and many of the events are free.  With each visit, players will get a stamp on their map and can win prizes based on how many locations they stop at.

Li says ultimately the game crawl is about bringing people together and having fun.

“People are always trying to find ways to get together and board games are super easy to do that.”

View all posts by Emily Mcwilliams →

The Dogs Return to Rotholme
Is Western’s Senate Confident In Their President?