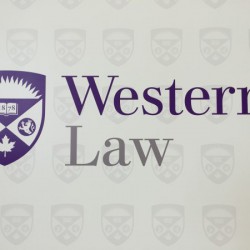 You and your partner have decided to get a divorce. You both have stable jobs, stable incomes and some savings.

Your first thought would be to call a lawyer, right?

Well, for over half the people in North America going through the family law system, it turns out the answer is “No.”

This was the topic tackled at the Access to Justice Issues in Family Law Symposium by Western University’s Faculty of Law on Friday.

It aimed to break down barriers and create solutions for the more than 50 per cent of people who decide to represent themselves in family court. SRLs are treated with hostility as soon as they enter the legal system, said Dr. Julie Macfarlane.
Photo by Amy Legate-Wolfe

This number continues to grow across every part of society, said keynote speaker Julie Macfarlane, who heads the National Self-Represented Litigants (NSRL) Project.

“We have a far more diverse group now representing themselves than we’ve ever had before,” said the University of Windsor law professor.

This number is higher in urban centres, such as Toronto where 78 per cent of people who go into family court don’t have or lose representation. But these self-representing litigants, or SRLs, aren’t all from the poorer or less-educated parts of society.

The NSRL project found that only 40 per cent of SRLs made less than $30,000 per year, while more than half had university degrees and almost 20 per cent made over $75,000 per year.

It might seem crazy that people wouldn’t call a lawyer, especially when they’re well-educated and when it seems they have the funds to have representation. But Macfarlane said there are a number of reasons why people choose self-representation, and it was no surprise that the number one reason was funds, said Macfarlane.

Even if people made more than $75,000 a year, it didn’t mean they could continue to pay throughout the legal process. For many of the people surveyed in the NSRL project, they started out with a lawyer but couldn’t afford to continue using their services. And given that they made a good yearly income, they weren’t eligible for legal aid. This left many making difficult decisions.

“It was either represent [themselves] now, or forget [their] kid’s college fund,” said Macfarlane. The symposium offers a chance for everyone from lawyers to legal aid representatives to discuss what SRLs need.
Photo by Amy Legate-Wolfe

But the single most important reason, she said, was Google.

People believe that if they have an education, they can figure it out by looking on the internet. And when they go to a lawyer and are told to simply believe them rather than guide them toward their final decision, it makes them look online to find a way to seek their own end goals.

“We can’t just say trust us it’s true,” Macfarlane said. “We have to do more than that now.”

The symposium brought together lawyers, judges, people from Children’s Aid and Women’s Community House, amongst others, for a chance to discuss the changes that are needed to give SRLs a chance in the justice system. Without this, the “epidemic,” as one lawyer called it, will continue.

“People need to feel that they’re being treated fairly,” said one of the symposium’s coordinators, Jennifer Foster. The purpose of today was to allow people to talk to each other and find ways to address the issues brought up by SRLs, she said.

But the main goal should be to create a shorter, less expensive, less stressful period of time to offer ways for SRLs to get out. Getting there, however, won’t be easy.

“There is no one solution, it’s complex,” she said. “But we have to get going.”

They’re Missing That One Thing
Western president made $924,000 last year