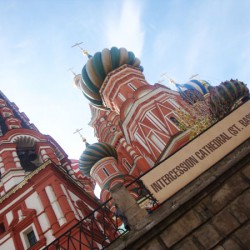 The taxi driver asks the man in the backseat. His accent is thick and vaguely Eastern European. A terse nod from the passenger causes the driver to break out into a wide smile.

“Welcome to Moscow!” he says.

And then cars start exploding, a beautiful spy sultrily unzips her black leather suit and a menacing-looking man snarls, “You know what I hate about Americans? Everything.”

So okay, it’s a movie trailer for the latest Die Hard film and not real life.

But stop, ahem, Russian to conclusions. Just because the Cold War ended over 20 years ago doesn’t mean Hollywood’s thawed out. Directors still rely on Russian rogues when they need a measure of maliciousness in their movies.

The 1980s may be the best known decade for bringing us bad guys like Ivan Drago and Sergeant Yushin (both, incidentally, in Sylvester Stallone flicks), but the Russian villain was a popular stock character both before and after Ronald Reagan told Mikhail Gorbachev to “tear down this wall.”

And in the world of action-packed blockbusters, Russian villains continue to be the crème de la Kremlin.

“Certain villains are unassailably villainous, like the Nazis, but then they become kind of clichéd, people get tired of them.”

“That’s never happened to the Russians, though,” he adds.

Indeed, a quick glance back through recent film history shows a staying power as strong as a shot of vodka: Jack Reacher, Safe, Act of Valor, Mission Impossible: Ghost Protocol, Limitless, The Tourist, Salt and Iron Man 2 are just a handful of movies from the past three years that have featured Slavic scoundrels.

So how to explain the lasting allure of the Russian bad guy?

History’s got something to do with it.

The Cold War mentality is one reason the Russians have stayed firmly on Hollywood’s radar, says Jennifer Eremeeva, an American writer and historian who has called Moscow home for the last 17 years.

Eremeeva points to the cartoon character Boris Badenov in Rocky and Bullwinkle as a comical figure who helped “gel” the Soviet stereotype. James Bond movie villains are another example of generic Eastern European bad guys that have stayed in our consciousness, she adds.

But Eremeeva says that could be changing.

“I think we’re maybe at a tipping point where that’s not going to be the case anymore,” she says via Skype from her Russian home. “I think the people who are making films grew up with that sort of Reagan-era idea that the Russians are the baddies, but for the younger generation of filmmakers, the Cold War is history so it’s maybe not as relevant.”

(What do some Russians think of how they’re portrayed? See sidebar below)

Historian Alison Meek, who lectures on Cold War America and American popular culture at King’s University College, agrees. “The Russian bad guy is definitely one that resonates with audiences who grew up during the Cold War,” Meek says.

Russian villains started showing up on the big screen almost immediately after Second World War as tensions between the U.S.S.R. and the U.S.A. solidified.
In 1947, the House Un-American Activities Committee (HUAC) held trials investigating alleged communist propaganda in Hollywood, says Meek.
The result of the trials – besides the blacklisting of more than 300 directors, actors and screenwriters suspected of Communist sympathies – was a rise in anti-Soviet films.

“Very few people (were) overtly going to make a pro-Soviet film because they were going to be called before HUAC,” Meek says.

Big Jim McLain (1952) is one example of a film created in response to the HUAC trials. In it, John Wayne plays a HUAC investigator who tracks down a cell of Russian spies in Hawaii. Big Jim McLain is one example of an anti-Soviet film in 1950s Hollywood.
(Wikipedia) .

“They’re all wearing the Russian fur hats in Hawaii, so that’s how they stand out,” says Meek. “It’s ridiculous but shows the mindset of the time. Nazis could be identified by swastikas, and Russians, this new villain, by their fur hats.”

The other film bad guy emerging in the early Cold War period was the space invader, inspired by the space race between the two superpowers, says Meek.

Invasion of the Body Snatchers (1956) and The Blob (1958) are campy, Meek says, but they make the point: evil is infiltrating America.

The 1960s and 1970s saw a brief thaw where movies became more questioning, thanks in part to filmmakers like Steven Spielberg and George Lucas going to film school. “Moviemaking is becoming more of an intellectual pursuit, and you’re also getting the rise of the independent studios too which makes a difference,” Meek says of those decades.

But the Cold War froze up again under then-president Reagan, in the aftermath of the Vietnam War.

“You get Rambo in Afghanistan fighting the Russians, and Charlie Sheen and Patrick Swayze in Red Dawn fighting off a Russian-Cuban-Nicaraguan invasion of America,” says Meek.

“So aside from that limited sort of respite in the ’60s and ’70s, American film has this really strong history of villainizing the Russians and that hasn’t disappeared.”

The rise of the Russian gangster

Even if it hasn’t disappeared, the way in which Russians are villainized in Hollywood has changed.

The hammer and sickle no longer flies over Red Square, and if there’s said to be a Communist threat to America today, it probably won’t be coming from Moscow.

However, there’s a new breed of Russian villain showing up with greater frequency: the gangster.

“It’s hard to beat the Russian gangster,” film critic Johnson says. “They’re the ultimate. That’s why the Russian bad guy still has so much currency in films today.”

“When you have organized crime in movies, it’s now a Russian or an eastern European,” she points out.

Both Johnson and Eremeeva reference David Cronenberg’s Eastern Promises (2007) as a film that paints a terrifying picture of the Russian mafia.

And with gang wars heating up again in Russia, Eremeeva thinks the Russian gangster won’t be disappearing from Hollywood any time soon.

“Two things are happening in Russia,” she says. “The original people who ran the gangs 20 years ago are getting older and dying off, and then the younger generation are realizing they haven’t had a piece of the Sochi (Olympics) construction, and that the state has moved in and things are getting out of their control.”

Johnson adds, “The Russian mafia is genuinely scary to people, and they have a pull and fear that’s been reflected in movies.”

As scary as the Russian gangster is, Johnson says the Russian nationality remains a “safer” option for Hollywood.

“Hollywood movies are escapist. People don’t necessarily want to see things that are too real,” the film critic says.

Movies featuring Arab villains, like The Hurt Locker (2008) and Zero Dark Thirty (2012), are critically acclaimed but not commercially successful, says Johnson, and that’s because they hit too close to home.

“Americans don’t want to go to the movies to see what they can watch on the news,” he points out.

Historian Meek sees The Sum of All Fears (2002) as an example of an attitude shift that occurred after the Sept. 11 terrorist attacks.

The villains were changed to Russians in the film version, despite being Arab nationalists in the original book, Meek says.

“I think it’s safe to say Hollywood struggles with the Muslim bad guy in this post-9/11 world,” says Meek. “There’s a sensitivity about portraying Muslim villains that really doesn’t exist for Russian ones.”

Johnson concurs. “I think Hollywood is wary of being accused of racial profiling,” he says. “Some stereotypes are safer than others.”

This applies not only to Arab and Muslim villains but Chinese too, although Johnson says Hollywood’s reluctance to have a Chinese bad guy is more of an economics choice.

“All anybody’s talking about in Hollywood right now is selling movies to China,” he says. “In terms of a trade partner and a big foreign market, it’s all about the Chinese and you wouldn’t want to do anything to jeopardize that financially.”

China is on track to topping the U.S. as the biggest film market in the world by 2020, with an average of nine new screens opening every day, a November 2012 Ernst & Young report says.

China’s economic pull – and Hollywood’s reluctance to alienate a lucrative market – has already been reflected in MGM’s decision to digitally change Chinese villains to North Koreans in the 2012 remake of Red Dawn.

But it really doesn’t matter if the villain’s Russian or North Korean, says Johnson.

“The important thing is that the villain not be American,” the film critic says. “The villain is just a stock figure, an incarnation of what we’re supposed to be afraid of. He’s a reflection of our fear, of what scares and spooks America, what makes America paranoid.”

And in the end, Johnson says, “rugged American individualism is what wins out.”

From Russia with Love Here’s a short list of memorable Russian villains in scenes from their Hollywood films:

What do Russians think about Hollywood’s portrayal of them? In an informal survey with eight Muscovites, everyone had a sense of humour about being the bad guy:

“We always laugh at the broken Russian the ‘Russian’ gangsters speak and the funniest thing is when they call each other ‘Mikhail’ or ‘Vladimir’ in ordinary speech or while firing at good heroes,” said Ayna Nuralieva, 28. “No normal person calls a friend here by his full first name – it sounds so weird.”

Ilya Nevzorov, 26, said Russians don’t really care about any stereotypes Hollywood might fall back on. “Many Russians play along with these stereotypes. It is easier to define our fake self-identity in front of the foreigners as far as I being Russian and living abroad can tell,” the Russian biologist, who teaches at a university in Helsinki, said.

And Sasha Salova added, “It’s funny – we don’t really use Americans as our bad guys!”