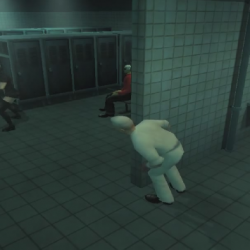 An NYPD detective chases his mark through a parking garage, exchanging fire with henchmen hired by B.B. Hensley, the man who killed the detective’s family. About to turn a corner, he stops and takes cover. A van with two mounted machine guns fires wildly at him.

A car honks its horn as it passes between them, but the van does not stop firing and the car explodes. Fire smoulders as the van drives away.

Time slows to follow the hail of bullets as the detective leaps out from cover and picks off the remaining lackeys with his rifle.

The voice belongs to 26-year-old Baldur Karlsson, who goes by Baldurk online. This scene is part of his 2009 Let’s Play  – where someone records themselves playing and talking over a video game for the Internet – of the game Max Payne.

Let’s Play began three years earlier on somethingawful.com’s community forums where members – known as goons – posted screenshots or videos of themselves playing commonly remembered games like The Oregon Trail and Pokémon, according to the LP Archive, which hosts permanent links to past Let’s Plays. Players added humorous or informative commentary as they played and encouraged fellow goons to name characters or suggest strategies.

After Let’s Play became popular on somethingawful.com, members of the YouTube community started to embrace the idea of talking over their video game play-throughs. In the years since, this phenomenon has grown large enough to allow some Let’s Players on YouTube to make a living from ad revenues, said Karlsson, who administrates the LP Archive. While a YouTuber’s earnings depend on the number of views amassed, Brian Warner of celebritynetworth.com estimated that Pewdiepie and TobyGames – two of YouTube’s most popular gaming channels – respectively earn $7 million and $2 million annually.

“LPs and LPers have reached a level of popularity and awareness within the gaming community that wasn’t there not too long ago,” Karlsson said in an email from Nottingham, England.

But what has drawn so many people to watch others play video games like this?

While anyone who spends enough time on YouTube will eventually come across a Let’s Play, viewers keep watching them because of both the games and the players, said Andrew Watson, 27, who goes by Rushnerd when watching Let’s Plays and making short gaming videos. “I just kind of noticed after a while that people started playing games and talking over them,”  Watson said via Skype from Medford, Ore., “but what made me notice it was some people would have their own style and they’d pick more obscure games that really were well suited for the Let’s Play experience.”

Watson’s favourite Let’s Player, a goon named Supergreatfriend, mixes dry humour with thorough exploration of unusual games such as Deadly Premonition – a supernatural murder mystery game influenced by Twin Peaks. Watching Supergreatfriend tackle a game he knows well allowed Watson to enjoy the game better than if he had to keep track of the game’s story while trying to navigate it himself, he said.

“He’d already played it so he knew where to go,” Watson said. “And it’s a game I would just get lost in so it was actually more beneficial for me to just watch him play it with his commentary and insight and he keeps track of the plot for you.”

As for Let’s Players themselves, most will record a play-through either to entertain their viewers and each other with funny in-game antics or to show off a game’s interesting features, said Karlsson.

Let’s Play done purely for fun becomes an avenue for friends to hang out and joke about the games they’re playing, said Future Friend, a 19-year-old Let’s Player who declined to give his name for professional reasons.

When he and his friends came across a leather-clad woman giving an opium waiter an erratic lap dance during his ongoing Let’s Play of Hitman Contracts, they laughed at how her dance seemed to take her further away from him as if she were trying to sneak away.

“Nothing else really to it for me, just a dumb pseudo-hobby I like to do sometimes,” Future Friend said about why he indulges in this pastime. “I think a lot of them take Let’s Play too seriously, at times.”

Others use Let’s Plays to showcase obscure or under-appreciated games and give viewers a sense of what they enjoyed about them, said David Boreham, 21, who plays old Playstation games under the name DJBPlaythroughs.

“I thought it was interesting to see video games from different people’s perspectives,” Boreham said via Skype from Milton Keynes, England. “But something I noticed was that a lot of the games I would play when I was younger weren’t being discussed or a lot of people didn’t even know about them so I kind of wanted to show them off myself.”

Boreham’s play-through of Rat Attack – a puzzle game where the player controls cats who trap rats with rings and step on pads to destroy them — attracted the attention of the game’s developers. They enjoyed his Let’s Play and said they were happy that someone remembered and enjoyed the game, Boreham said.

While Let’s Players and fans agree that humour and personalities of players can attract viewers, the chance of discovering obscure or forgotten gems carries its own allure for fans like 19-year-old Scott Greenley, who wanted to learn more about games in general when he started watching Let’s Plays.

“At the time, I didn’t know much about games prior to the Nintendo 64,” Greenley said, “and there were other games showcased that I didn’t know existed. Such play-throughs provided information on both of these.”

Certain Let’s Plays can also appeal to fans of featured games by showing strategies or secrets they never knew about, said Greenley, who goes by Trisask09 on YouTube. For example, a goon named ChipCheezum captured a frog in Metal Gear Solid 3 and showed that if the player finds the same frog after the main character loses an eye, it will wear an eye patch.

Some Let’s Players will hold game-related contests among their viewers, but Boreham likes to invite viewers to join his recordings and share their impressions of what he’s playing, he said.

But with the rise of Let’s Players making money through YouTube ad revenue and the prevalence of “scarecam” Let’s Plays – where YouTube personalities insert film of themselves showing exaggerated reactions to supposedly scary games like Slender or Amnesia – fans like Watson and Greenley see much of the YouTube Let’s Play scene as artificially hunting for viewers and making their play-throughs about themselves and not the games.

“Because of its nature as a video hosting website, and a very large one at that, there is not and cannot be any meaningful discussion or criticism about LP as a whole on the site,” Greenley said. “It is over saturated with thousands of LPs, with the fanbases of popular LP’ers being particularly hostile to each other.”

The somethingawful.com scene is more immune to this trend because of specific rules on the website’s forum against soliciting and the community’s standards for technical quality and worthwhile commentary, said Greenley.

Yet Future Friend and Boreham said they are not concerned with amassing large audiences. Instead, they are focused on having fun and entertaining those who do happen to watch them.

“I think people are a bit too obsessed with getting exposure and trying to become the new big thing when really it shouldn’t be about you so much as it is the games,” Boreham said. “I couldn’t imagine doing that, frankly. Even as an actor I think that’s quite an unsustainable job.”