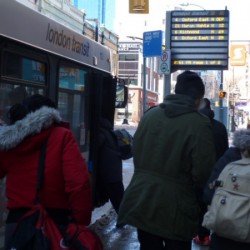 The car was central to urban planning for the baby boom generation.

Now, many North American cities are beginning to see public transportation as the key to attracting a young workforce and, with it, economic growth.

That’s the view of many transit experts, including three who spoke about the benefits of rapid transit at the London Public Library as part of a public information meeting for Shift, London’s initiative for rapid transit.

“London is ready and the time is right,” said Michael Roschlau, one of the panellists.

The time is right because there is a changing attitude toward public transportation, Roschlau, president of the Canadian Urban Transit Association, told a crowd of Londoners.

“We’re seeing that already – I think – especially with the younger generations that are looking to live closer to work,” he said.

Millennials who are choosing to live where they work are part of an increase in urbanization globally, said Sarah Kaufman, digital manager at the Rudin Center for Transportation, which researches “the flow of people, goods and information” in New York City.

David Foot, professor emeritus at the University of Toronto, disagrees with Kaufman. He says that in the coming decades, as millennials start families, they will buy cars and move to the suburbs.

Over the last 15 years, transit ridership has increased because millennials have moved to cities, Foot said.

But, just at the time when cities are beginning to invest in public transportation, the trend in ridership may be reversing.

“The increase in growth is over now,” said Foot, who is the author of Boom, Bust and Echo, a study of Canadian demographics.

The assumption that you take your attitudes from your 20s into your adult life underpins much of urban planning, Foot said. Your needs and means are different in your 30s and 40s than they are in your 20s.

“You gradually become more and more like your parents as you live your life,” Foot said.

But millennials may not become like their parents, said Kaufman, who is an assistant professor at New York University.

“The classic suburb is looking less desirable for millennials,” Kaufman said. “People want to be near their friends. They want to be near entertainment. They don’t feel the draw of the open road as older generations did.”

While previous generations drove to work, millennials want to live where they work. If cities want to attract businesses, they need to draw in a younger workforce, Jeff Casello told Londoners at the Shift meeting.

“This is who we’re trying to attract to our urban centre.”

In Waterloo, where a rapid transit system is set to launch in 2017, developers built projects around the system, Casello said. One of the projects is a 14-storey condominium.

“There will be a rapid transit station immediately out the front door of that new high-rise condominium,” he said. “That building was sold out before it was beginning construction.”

In response to the rapid transit initiative, technology companies have also settled in Waterloo in the last five years.

While rapid transit may be a key to economic growth in the future, some of the challenges cities face come from the past.

Cities built suburbs in the 1940s and ‘50s because that’s what people wanted at the time, said Richard Harris, a professor at McMaster University.

“It makes sense to interpret suburbs as an expression of a set of preferences and a certain lifestyle,” Harris said. “A lifestyle built to a large extent around the use of the automobile.”

“In planning suburbs in this sort of a fashion, people were not thinking ahead.”

Developers didn’t think about such issues as air pollution, travel time or infrastructure costs when they built suburbs, he said.

“It’s something that people learn – or discover, I guess I should say – over a period of years or maybe even decades.”

For example, towards the end of her tenure, Hazel McCallion, the former mayor of Mississauga, shifted her views on development away from putting the car at the centre of planning, Harris said.

“She was gung-ho and keen on this form of development,” he said. “In the last few years or so of her reign, as the infrastructure costs started to pile up, she started to realize this was very problematic.”

At the Shift public information meeting at the London Public Library, McCallion told a crowd of Londoners that transportation should be central to planning and development.

“I want you to benefit from the mistakes we made,” McCallion said. “If you don’t do it now, it’ll cost you twice as much down the road.”