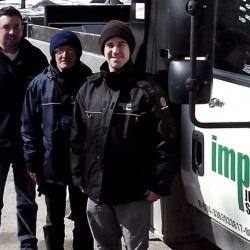 Just a few weeks ago, Dan Smith was surviving off nothing but his monthly $850 Canada Pension Plan cheque and donations from the London Food Bank.

The 65-year-old London native had been unemployed for a year.

Then Impact Junk Solutions took a chance on him.

“It has been pretty rough getting through (it),” he said. “Hopefully this is going to allow me some independence.”

Impact Junk Solutions is a for-profit junk removal business that was launched in 2012 by the not-for-profit Middlesex Canadian Mental Health Association.  With London facing high unemployment, the organization hoped to generate jobs for its members living with mental illness.

With his thinning hair, heavily-lined face and glasses, you wouldn’t expect Smith to be the latest addition to a team that hauls furniture, electronics and other “junk.” But Smith had his company pension and dreams of a work-free retirement taken away when Northern Telecom closed its doors in 1994.

“I was 45 years old, and I’d never worked anywhere else,” he said. “It just leaves you feeling lost.”

Since then, Smith, who suffers from epilepsy, has gone from job to job.  But he hopes the position at Impact Junk Solutions will provide some stability.

Unlike newcomer Smith, 28-year-old Greg McKeen, the company’s crew supervisor, has been with the organization since the beginning.  Smith was studying graphic design at Fanshawe College when he started struggling with depression and anxiety.  Unable to cope with his illness, McKeen dropped out and isolated himself in his parents’ home in London. Greg McKeen, left, and Dan Smith show off a television, bike and other treasures collected during the day.
Photo by Mike Shulman

It took him several years to build the confidence necessary to hold down a steady job. It wasn’t until McKeen sought treatment at CMHA and developed some self-esteem that he was ready for full-time employment at Impact Junk Solutions.

Kevin Dickins, 29, the program manager and one of the founders of the company, said he takes pride in the fact that they’re the “weird” junk removal company in town.

Impact stores roughly 75 to 80 per cent of gently-used material in its warehouse at 3334 White Oaks Rd. The remaining 20 to 25 per cent is recycled.  In total, Dickins says, they have diverted over 200 tonnes of material from garbage dumps.

“We are probably the only dump truck that’s never been to the dump,” he said.

The gently-used products are donated to Habitat for Humanity and Goodwill. People can also claim items from the warehouse.

So far, the venture has been successful.  In its first year, Impact Junk Solutions generated a profit, which was used to fund other programs at CMHA.  And what started with three employees has now expanded to 15.

Despite the company’s growth, Smith says this job is different than others he has had in the past.  He doesn’t feel like he’s defined by his employee number.

“You get a feeling that people care about you.”

Coffee with a cause
Londoners shine light on energy conservation