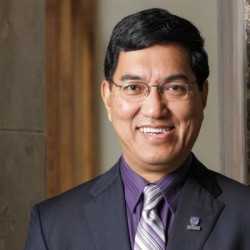 The president of Western university earned nearly $1 million in 2014 – more than double his earnings the year before, and almost $500,000 more than the next-highest-paid person at the university.

Chakma, who has been university president since 2009, has an official salary frozen at $440,000. The extra $480,000, which is not technically part of his salary, comes from payment for a year of administrative leave that Chakma chose not to take.

Under the terms of his 2009 contract, Chakma was entitled to a year of administrative leave at the end of his five-year term. The university’s board of governors, which sets executive salaries at Western, appointed Chakma for a second five-year term last year.

“As opposed to taking the leave he received a payment in lieu of his time,” said Chirag Shah, chair of the board of governors. He added that such an arrangement is “quite common” in the contracts of other university presidents.

“You have to understand the environment,” Shah said when asked if the number seemed high. “Dr. Chakma is one of the most senior academic leaders in Canada.

“It remains less than he could earn at a U.S. university or definitely in the private sector,” he said. “The board feels that it is a very fair compensation for the quality of the individual that we have.”

Chakma’s earnings were revealed today by the “Sunshine List,” the Ontario government’s annual disclosure of earnings for public-sector employees making over $100,000 per year.

According to the list, Chakma was the third-highest earning public-sector employee in Ontario in 2014.

William Moriarty, President of the University of Toronto Asset Management Corporation, was also near the top of the list at $937,500.

Shah said that number can mostly be attributed to Gibbons Lodge, the university-provided residence in which Chakma lives, and where he holds frequent university-related functions.

The next highest-paid employee at Western, Schulich School of Medicine and Dentistry dean Michael Strong, made $462,125.92 in 2014, according to the list.

Under the new collective agreement, contract faculty who have worked at Western for 14 years will no longer have to face an annual renewal process, subject to an approval process.

Many instructors at Western work on contracts which must be renewed every year, and are often paid low wages. Last year, two contract faculty launched a social media campaign to raise awareness of contract faculty and staff living below the poverty line.

The University of Western Ontario Faculty Association could not be reached for comment.

The Epidemic Of Self-Representing Litigants
Knights kick off OHL playoffs vs. Kitchener