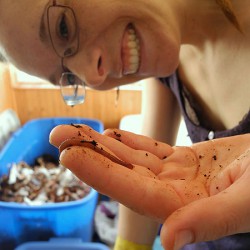 By Francis Siebert on April 1, 2014 in Business

In a small room of a small apartment located above a small convenience store, Erin Boynton snaps on a yellow rubber glove and thrusts her hand in a light blue plastic box filled with feces, decomposing food, newspapers and worms.

Last November, Boynton founded I’ve Got Worms — Compost Creations out of her apartment in London where she raises and sells worms along with homemade worm compost systems.

“I really want to encourage people to grow their own food, and I think this is something that helps people start to do that,” she said.

Boynton’s vermicompost systems are made of two plastic boxes inside one another. They come with either half a pound or a pound of red wiggler worms, some bedding material and an instruction booklet.

The system can be stored pretty much anywhere — if maintained properly, it doesn’t smell. It’s ideal for people in apartments or people without backyards, she explained.

“It’s like having a really low-maintenance pet,” Boynton said.

Vermicomposting is also much quicker than traditional composting. Boynton said that unlike an outdoor composting system that freezes in the winter, the worms in a vermicompost system continue eating food scraps and creating compost throughout the year.

“You’ve been composting all winter,” she said. “By the time it’s spring, you have enough.”

The compost can then be used as an organic fertilizer for plants.

“When you re-compost a banana or something like that, those nutrients go back into your compost,” said Gail Durand of Heeman’s, a local garden centre. “When you … work (the compost) into your soil around your vegetable garden, then (the plants) get that natural nutrient back.” Natural compost is much better for the environment than artificial fertilizer, Durand said.

Boynton first started composting with worms about seven years ago when she studied ecosystem management at Fleming College in Lindsay, Ont. The school’s residence had a heated outdoor worm compost system, she explained. Each dorm room had a designated bucket in which students could put their food scraps in and later dump into the compost system.

She attended a vermicomposting workshop where she bought her first worm compost system. Since then, she’s gone through several.

“It was just a hobby that I was doing for a long time,” she said. “And a lot of people seemed to take interest in it when I showed them.”

Boynton is not making a fortune selling vermicompost systems. And she’s fine with that — it’s not her goal.

“I want to change the way people see opportunities for gardening and composting.”