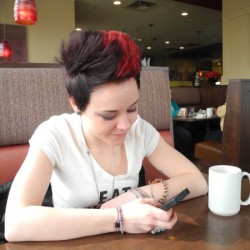 Cassie Ferguson is new to the game.

Her tightly-cropped hair is freshly dyed, the tip spikes upward — like the stud bracelets circling her wrists — into a faux-hawk and is tinged with a red streak.

Everything about her points to a challenge, and her Tinder profile is no different. A screenshot of Cassie Ferguson posing in her Tinder profile picture.
Photo by Mike Shulman

With one arm planted on her hip, dark makeup accenting her eyes, and her lips pressed into a smirk, it’s as if she’s beckoning prospective matches to swipe to the right — if you dare.

On Tinder, the fastest growing mobile dating service in the U.S., a swipe to the left on a user’s profile picture is a kiss of death, while a swipe to the right means you are ready for the next level — a conversation.  If the other player swipes to the right, after looking at the first person’s profile, then the match is approved and the two can message each other.

Profiles are linked to Facebook profiles, meaning Tinder users can select several photos from the social networking site to display. The app also shows any mutual Facebook friends and your proximity to others by GPS. It has been one of the top 20 apps downloaded by Canadians in Apple’s iOS Store this year, according to App Annie. Since the app’s launch in September 2012, Tinder claims it has facilitated half a billion matches, most of them between people 18 to 24.

But is Tinder helping or spoiling a generation of youth who are increasingly relying on technology to help them connect – in love and in lust?

Cassie slams her hand on the table at a coffee shop in London, and exclaims “Yes!” describing what it feels like to get a match.

She finds herself using Tinder over morning coffee, when she has free time; often when she’s with her girlfriends, they’ll take out their phones and start swiping.

“It is addicting ’cause if you’re bored you just pull it up,” she says.

Cassie has loved a lot in her 24 years, but hasn’t, until recently, spared some for herself.

Her past two relationships started with men she met at Alcoholics Anonymous. With the first, she thought the pair could “save each other.”  They dated for nearly two years and he is the father of her two-year-old daughter, Madison. The second is her former fiancé, whom she dated for a year and a half, until they broke up in September.

“I used to hop into relationships fairly quickly,” she says.

The Strathroy, Ont., native still wears the scars of her failed engagement in the form of a tattoo that says “I Love Him” across the inside of her bicep.

“This is a spur of the moment tattoo,” she laughs.

“People were like, ‘what if you guys don’t work out?’ It was just at the time I liked the idea of getting married and having a family.”

After her breakup with her fiancé in the fall, Cassie decided she wasn’t ready to “settle.”

Sober for five years, she is now looking to meet men online. She downloaded Tinder in January and has been on six or seven dates since.

Cassie says she’s not looking for her soul mate, just looking to have some fun. She likes guys with tattoos, baby faces and beards, but won’t talk to guys with cocky, topless selfies.

She matched up with a “decent-looking guy” from Toronto on Tinder. After about a month of messaging, they added each other on Facebook. Cassie makes sure to “creep” the Facebook profile of her matches to see if everything is as advertised.

Eventually the two decided to meet up in person.

Cassie invited her match over to her house one night and he drove to London.

“(It) was the only time I’ve ever done this,” she admits, eyes locked on her phone, which rests on the table in front of her. “I had a little bit of nerves, but I just had a gut feeling that I knew he was who he was.”

Cassie had taken precautions; she told a friend she would send a message in case she needed to be rescued from the date.

However, the match was a romantic success – or at least a physical one – score one for Tinder.

Cassie says she doesn’t go to bars to meet men and that generally people are shy in person.  Tinder, she says, helps ease people’s fear of rejection.

To the critics who think Tinder is shallow, Cassie responds: “Oh it is very shallow,” she laughs. “Everyone has their preference — I don’t think it is shallow if you know what you like.”

Guy Grenier, a psychologist who specializes in sex and marital therapy, agrees with Cassie’s assessment of Tinder.

“It is simply a technological version of sizing somebody up,” he says.

“When we walk into a bar, 90 per cent of initial attraction is based on physical appearance.”

Grenier, 52, says youth aren’t becoming more superficial, they’ve simply found another medium to make the same evaluations as they did before.

“Before you used to have to go to a bar, you had to take a class or you had to introduce yourself in a line a grocery store or be introduced by a friend,” he says. “You can still do all those things, none of those things have been taken off the table, but we’ve just added to the table.”

Grenier says that Tinder’s focus on appearances can leave some users dejected, but this is a natural sorting mechanism and people who can’t find success will look elsewhere.

“But if you know you’re a three or four, and you’re going to get judged on the superficial, it is going to be a less attractive (medium) for you.”

Tatiana is a 21-year-old from Toronto who recently deleted her Tinder account. She felt the app was too superficial and, despite getting many matches with men, very few led to conversations and none to dates.

“There are two sides of it: first when you get a match you’re like, ‘Oh yeah, validation, I feel so great.’ But then once you get the match and nothing comes out of it, it’s a blow to your self-esteem,” she said.

Tatiana was looking for conversation, and instead she found that “everyone’s just there for one reason – that’s for sex.”

This isn’t a problem, according to Grenier. He compares the hook-up culture on Tinder to society’s desire for fast food.

“Sometimes you want a five-course meal and you want tablecloths, candles and napkin rings.”

“Sometimes you’re hungry and you just want to scarf down a burger; nobody would say that is wrong, but that’s just what you’re in the mood for,” he said.

Grenier says that Tinder users who are looking for more than hook-ups should look elsewhere.

“If you’re looking for the five-course meal there – it is really unlikely to happen.”

That’s what happened to Alissa – she was looking for a five-course meal while sitting in a fast food chain.

The 22-year-old Western University student has been using Tinder for two months. She is tall, with newly dyed blond hair that doesn’t match her Tinder profile picture but matches her blue eyes.

When she first matched up with Zac, she liked that he had a photo with a mini horse and didn’t open the conversation – like one guy — with “Hey girl, can I lick your butthole?”

And Zac was different.

Alissa was surprised he was so cool and, after messaging back and forth on Tinder, they exchanged phone numbers. Virtual reality became reality when Zac asked her to dinner.

“It hit me, I’m not playing a game anymore – this person wants to meet me,” she says.

She was nervous for their first date. She made sure that her roommate knew where she was going and to be worried if she didn’t contact her by a certain time.

They ended up spending three hours at a restaurant in London. The pair went on several more dates, but things “fizzled out,” says Alissa.

“I have a feeling he was upset that I wouldn’t do anything with him, and I think he was expecting something,” she says.

“I think you shouldn’t do anything ’til you’re in an exclusive relationship, and we weren’t there yet.”

“So, I think he got frustrated.”

Alissa has been out on one other Tinder date, but is starting to think people are just looking to hook up. But she still appreciates that Tinder gives her a chance to meet new people.

The gay community seems to include a number of users looking for fast food hook-ups on Tinder. Despite the popularity of Grindr – a location-based dating app for gay, bi-curious and bisexual men – many users are also turning to Tinder. A screenshot of Tyler Cole showing off his abs to attract men on Tinder.
Photo by Mike Shulman

Tyler Cole is 18, and, according to the tagline on his Tinder profile, he likes running, friends, school, exercise and work. His picture is a selfie of him holding up his shirt to reveal a thin frame and chiseled abs.

Tyler first turned to Grindr as a closeted youth.

“I didn’t really have that outlet or that opportunity to go to a (gay) bar … so being gay it’s hard to meet people,” he said.

The student at Western University has been using Tinder for about four or five months and in that period of time he has had three hook-ups. He’s not looking for anything serious, just sex or casual dates. Tyler works at London’s only gay bar, Lavish, as a busser and says the gay community on Tinder is usually just looking for sex.

During the university’s February reading week, Tyler found a match with Alec from Ottawa.  Tyler was initially attracted to Alec because his profile pictures involved sports and it seemed like they had some things in common. The pair started up a conversation on Tinder. After adding him on Facebook, Tyler invited Alec to come over to his residence building and they hooked up.

Despite having met up with matches on Grindr and Tinder before, Tyler was nervous at first.

“I was hoping he was just normal and that he wasn’t going to cut my skin off,” he jokes.

Tyler says because Tinder shows more pictures and is linked to Facebook, he finds the experience less worrying compared to Grindr. On Grindr, Tyler says users often manipulate their picture, age and even relationship status to make their profile more attractive.

Grenier says while older generations might be scared off by the risks inherent to Tinder, the youth have developed safeguards from their experiences growing up on the web.

“It is not like all the (traditional) ways of meeting people were without their risks as well,” he said. “A friend could introduce you, you could meet someone at a bar or in a lineup or a class and they could turn up being a bad person — there’s still no mechanism that guarantees safety.”

The Cassie of five years ago wouldn’t have been able to use Tinder – she had no self-esteem.

It can be daunting to jump into online dating, but Cassie has grown comfortable and gained confidence.

“I feel like a more independent person now,” she says.

“I don’t need someone to take care of me, I can take of myself. If I find someone I want to share my life with great, if not, I’m really content with where I am.”

So, swipe to the right – if you dare.

Labour movement asks youth for help
The future is now: Online spying tracks us all