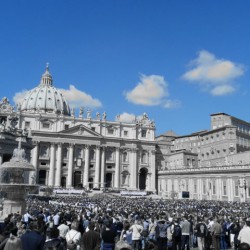 By Ryan Mallough on February 26, 2013 in Community

Jordan Moffatt hopes that the next Holy Father will reach out to Catholic youth.

Moffatt, a 23-year-old university graduate, was raised Catholic and still identifies with the church, but describes himself as a “non-practicing, non-believing Catholic.”

“I’d like to see the next pope be someone a bit more moderate,” Moffatt said. “I’m not saying they need to completely modernize and allow gay marriage – though I think they should – but to do something reasonable, like letting someone wear a condom would be a really positive step to re-engage the youths.”

With the resignation of Pope Benedict XVI, the cardinals of the Catholic Church will convene for conclave within a month to elect a new Holy Father.

The 267th pope will ascend to the throne of St. Peter at a time when the church is struggling to connect with young people. The new pope will have to answer the question: how can a millenniums-old institution engage youths in a modern world?

Moffatt said that he has become disenchanted with the church because of its stances on human rights issues and contraception.

“They’ve acknowledged evolution, so it’s not out of the question to be reasonable.”

Moffatt also noted that the opulence of the church really turns him off. “I think it sends the wrong message. I think the Pope, someone like John Paul II, was always much more effective when he’s travelling and away from the image of the Vatican.

“Ideally I’d like to see a younger guy who takes moderate stances and travels a lot,” Moffatt said.

“That physical presence around the world as well as a strong online one will help young people reconnect, anything that demonstrates that it’s run by human beings with thoughts and feelings rather than these rigid doctrines,” he said.

From his perspective working with young Catholics, Moynihan believes that the best way for the next pope – and the church as a whole – to connect with youth is to engage them in dialogue on major issues like sexual orientation.

“I think we have to be a church that’s conversant with people and not just be the “in” or the “out” – that’s going to be critical in that area of teaching,” he said.

Moynihan said that the basic principles of the church are still relevant and resonate with today’s youth.

It’s a matter of communicating them.

“The principles of justice and servitude, in the Catholic tradition, are some of the most rich teachings we have,” said Moynihan. “Young people really get fired up when they perceive or see an injustice – they want to do something about it.”

Moynihan feels it’s about addressing the apathy in today’s youth – an issue that he feels isn’t unique to the church, but exists across most institutions.

“The effects of individualism run across our society. It’s not just the church that’s having a struggle with drawing people together,” said Moynihan. “It’s something that challenges us as a culture moving from a communal experience to an individual experience and how that’s going to shake out.”

It’s one of many concerns the new pope will face early in his papacy, said Moynihan.

“As a church, we’re going to have to say why is gathering important? Why is being accessible important? I think the answers to that will be important for our church moving forward.”