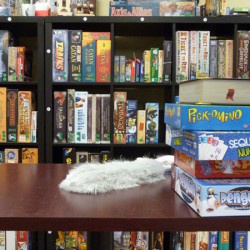 Jenny Mayer and Jessica Cooper stare at a chestnut-brown chess board, planning out their next move. Mayer sits by the window, quietly sipping a cup of orange pekoe tea as traffic outside on Dundas Street rumbles by.

For these two friends, The Cardboard Café offers a reason to leave the house.

“It’s nice to get out and play a game,” Mayer said.

It’s Mayer’s second time at The Cardboard Café in downtown London, which provides a library of board games to its customers. The first time she came, it was with a group of six on a weekend night.

“We didn’t really necessarily want to hit the town and go dancing,” Mayer said. “We just wanted to continue hanging out.” Jenny Mayer and Jessica Cooper come to board game cafés for an experience that differs from a bar or coffee shop.
Photo courtesy of Allan McKee

The Cardboard Café is one of several cafés of its kind that have recently sprung up in North America. Josh Bricker, owner of The Cardboard Café, says that board game coffee shops are popular because playing a game provides a social experience for customers.

With a wide selection of games, the café offers a different kind of social interaction where people can have as light or serious a gaming experience as they want.  “That is incredibly engaging and what I think board games and gaming in general is all about,” Bricker said in an email interview.

Greg May agrees with Bricker that the draw of board game cafés is social. He started The Uncommons, a board-game café in New York City, in October 2013. May says that the cafe provides a better social environment than a bar or a traditional coffee shop.

“We’re a pretty popular date spot,” May said by phone. “Board games provide a low-impact, easy, intimate alternative to just sitting around.”

While the café is a popular venue for dates, most of the customers are already board-game fans, May said. Board games are the main attraction of The Uncommons ― and its advantage over other places in New York City.

The recent success of board-game cafés, like The Uncommons and The Cardboard Café, parallel the popularity of board games generally, he said.

The draw to board games has increased because, in a poor economy, they are seen as a more affordable, long-term investment than other forms of entertainment, said Mary Pilon, author of The Monopolists. In general, board games do better in poor economic times, Pilon said in an interview from Washington, D.C. where she was attending an event for her book. After the recession of 2008, board games were seen as a cheap mode of entertainment, she said.

“When you think about board games in the context of other consumer products, it makes a little more sense,” she said. “If you buy one board game ― that can last for a long, long time.”

Board-game cafés offer gamers the opportunity to enjoy a game over a tea or coffee.

The growing appeal of board games as a long-term investment has increased their overall sales. Sales have gone up every year for the last six years, according to ICv2, a board game business news site which tracks industry sales.

Days of Wonder, a board game publisher based in Los Altos, Calif., whose flagship game is Ticket to Ride, can confirm the increase in popularity.  The sales of their own board games has risen dramatically. Since its release in 2004, Ticket to Ride has increased sales each year, totalling over three million copies sold, said Mark Kaufmann, vice president of sales and marketing for Days of Wonder.

Part of the reason why Ticket to Ride has sold more copies year over year is the company made an app version of the game, Kaufmann said.

That exposure has helped make board games more popular and that popularity will continue, Kaufmann said.

While technology has created more exposure for board games like Ticket to Ride, it may also be the reason why people are turning to pre-digital play. The renewed popularity of board games may also be a reaction to the amount of time we spend each day in front of screens, say experts.

A backlash against technology has driven the increase in popularity, said Pilon, whose book tracks the history of Monopoly. As our lives move increasingly online, there’s a desire to have an in-person connection, she said.

“Board games reflect a really clear in-person connection that I think people still crave,” Pilon said. “Technology is pushing a lot of that.”

As long as people keep questioning their relationship with technology and how much time they spend with other people, then the trends will continue, Pilon said.

Back at The Cardboard Café, Mayer and Cooper have advanced on each other’s defenses, but their game of chess sits at a stalemate.

“Was it your move or my move? I don’t even remember,” Mayer says, with a laugh.