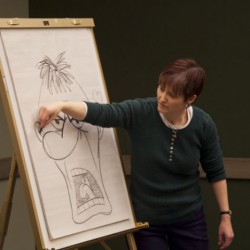 Alison Williams glances at her blank easel. Using a stick of charcoal, she draws a large circle on her canvas, and then divides the circle into four equal quadrants.

“From here we’re going to build a face,” she says. “I’m going to give my character a pair of glasses, and I’ll bring the eyebrows way up here, like two half-moons almost.”

She explains how to use exaggerated features to emphasize certain aspects of a character. When she draws lipstick on her portrait’s mouth, a boy sitting near the front groans.

Williams is a London-based comic book writer and illustrator. She’s wearing a pine green sweater; she has small, sharp features and her short brown hair is crowned by a shock of light bangs.

Today she’s at the London Public Library central branch leading a workshop on how to draw cartoony characters. It’s all part of the library’s Comic Book Jam, an annual event that encourages literacy through comic books.

There are 23 children and parents seated at tables in a half-circle facing Williams. Some of the younger kids are fidgety, standing or shifting in their seats, while the older, more serious children sit still, studiously focused on their sketches.

“He can have as many spikes as you like,” she says, surveying her work. “Yeah, don’t mess with him!”

“It doesn’t look like a circle anymore.” one of the kids exclaims. During the hour-long lesson, Williams draws cartoon faces, monsters and superheroes with her young disciples.Williams, now in her 40s, has been drawing since she was their age.

When she was younger, she was inspired by her favourite X-Men comics, attracted to “the depth and breadth of the stories and the detail of the art.

She continued indulging her passion after high school, studying illustration at Sheridan College. She’s been creating comic books with her brother, A. Jaye Williams, since 1999, when she returned home to London after the closure of the small Toronto printing company where she worked.

She couldn’t find employment at any small companies, and the big ones wanted to see what she could do first, so she went out on her own. Williams and her brother wrote and illustrated a Tolkienesque four-part fantasy miniseries called The Sorcerer’s Children and published it under the name SillWill Studios.

“I’m doing what I call ‘tradigital;’ it’s a combination of the traditional approach and the digital approach,” she explained. “I pencil the page on an actual art board and then I scan it in … and I do all my colouring and dialogue by computer.”

Williams still has to work as a fitness and self-defence instructor to support her animated endeavours, although she has been professionally creating paper comics for 14 years.

Now, empowered by the do-it-yourself attitude of the Internet and sensing a trend towards online comics, Williams and her brother publish their own web comic, called The Adventures of Astrodog, a science-fiction comic that takes place on the moon. They are currently working on the second issue. Williams plans to post one new page every week.

“Give it a generation and they’ll be predominantly electronic,” she predicted. “My generation is still around looking to get their hands on the printed hard copy, they want that feel. But the younger kids have grown up with computers. It’s going to feel a lot more natural for them to just download a comic onto their iPod.” Down the street from the library, Brahm Wiseman stands behind the counter at the back of Heroes Cards & Comics in downtown London. He has short, dark hair and a cropped beard that wraps around the bottom half of his face like a bandana.

Despite its deceptively small storefront, the shop extends far to the back. The walls and aisles are thick with colourful comics and collectables.

Wiseman has owned Heroes for 14 years. He says over the past two decades comic retailers have managed to coexist with the Internet. He says the “first blow was a lot bigger,” when eBay and Amazon changed the way comics could be bought and sold.

Wiseman says that although the music industry was ill-equipped to respond to the proliferation of file sharing and Internet piracy, the comic book industry is adapting well.

“They didn’t see what was on the horizon,” he said. “Comics have been sort of sitting back. We’ve been waiting. We’ve been working with technology to see how this is going to develop. So far it’s been really positive and I think it will continue to be positive.”

He says getting people interested in comics is still good for business, even though readers may prefer online options. After all, the music industry was able to reinvent itself after the shock of file-sharing sites.

“CD stores got hit hard. It was very unexpected, they didn’t know what to do. They didn’t develop a model on how to sell music so record labels just went belly up,” he said. “But also it’s not like less people are listening to music today. The same amount are, we’re just ingesting it differently.”

According to Wiseman, online availability hasn’t hurt sales at Heroes. He says paper and digital comics can exist side-by-side.

“I think there’s room for both,” said Wiseman. “I think I’ll always read paper (comics) at home and I have room to store it all, but when I’m on the road it’s really nice to load up the iPad and carry 1,000 comics in my pocket.”

This sentiment is also shared by some publishers.

“In our opinion, online comics are another way for people to make and interact with comics and that is a good thing,” said Ed Kanerva, a publishing assistant at Toronto-based independent publisher Koyama Press.

Founded in 2007, Koyama Press publishes comics, as well as art books and magazines. This year three of the five finalists for the Doug Wright Award for Best Book, honouring excellence in Canadian cartooning, came from this publishing house. Kanerva says he doesn’t feel threatened by online intrusion into his industry. The shelves and racks at Heroes Comics & Cards are overflowing with merchandise.
Photo by Josef Jacobson.

“We do not see online comics and self-publishing as an issue, but rather, another way to get people reading comics and appreciating art,” he said in an email interview. “The role of the publisher has not changed, but a new avenue has opened for cartoonists and artists.”

Back at the library, Williams is wrapping up the workshop. As she packs up her art supplies, she leaves some free samples of her comic books on a table.  She walks to a nearby coffee shop carrying her collapsible easel under her arm.

She says the ability to self-publish and self-promote has given opportunities to artists who may not otherwise have been able to crack into the industry. In between bites of shortbread, she takes out her iPod to show off her latest comic book trailers.

“This is for The Sorcerer’s Children,” she says, as ominous medieval music oozes from the speakers. “Our sister works with a lot of this stuff out west in Calgary. We email her the images and she puts it together with the soundtrack.”

The trailer shows off a series of panels while captions explain the plot. It’s about a group of friends trying to stop an evil sorcerer from taking over a magic kingdom. The illustrations display detailed characters and scenes of action.

Williams is looking forward to upgrading her art software but says the prices can be prohibitive. She says there are benefits of using ones and zeros instead of pens and ink.

“I’m running out of space to hang stuff,” she said. “The cool thing with digital art is you can do all this amazing work and you don’t have to worry about storage.”

In the future, Williams expects comics will be drawn digitally “probably almost from start to finish.” But despite the shift from the analogue to the digital, she says comics will never lose their personal, human touch.

“It’s not at a point where you can just press a button … and all of a sudden a beautiful piece of art is going to emerge,” she said. “You still have to have that foundation of drawing in order to do it. You have to have the skill and understanding yourself, you can’t get away from that.”

Comic book trailer for The Adventures of Astrodog: