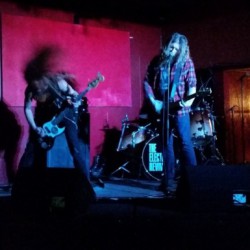 They came, they rocked.

And there was no one there to hear it.

They’re not the only band to come to town for a meagre crowd, and they won’t be the last.

Frontman Ian Dillon brushed it off. The band has been touring long enough to know any town can be a hit or a bust.

The vibe was similar to those times The Sheepdogs and Monster Truck, played London before they “made it big.” A smattering of people and the show was $5. Everybody has to start somewhere.

Electric Revival’s rock n’ roll revival sound is not to be skimmed over as another act banking on the nostalgic whims of Generation Y. The bold guitar solos and a gritty fuzzy bass with catchy melodies that can seem rock n’ roll at times, and punk at others.

Touring to support the release of their new album “Freaks,” the band gave an energetic and soulful performance.

“Your favourite songs are on that album, you won’t know it yet, if you don’t pick one up,” Dillon politely cajoled the few people in attendance.

The band’s sound derives from the technical virtuosity that defined rock n’ roll with the inevitable blues-grunge influence that comes with post-1990s rock n’ roll.

“You know we try to be a rock band that’s kind of how we see ourselves,” said Dillon. “We dabble into some Motown and then it gets into some kind of more heavy hard rock kind of stuff, but still being in that rock and roll element, and it makes it interesting you know?”

A couple years ago Dillon, who is also a sound engineer by trade, and his two best friends laid down some tracks in his basement for fun.

“The band was never really supposed to be a band,” explained Dillon. “It was just kind of a hobby with never any intention to play live. And when we put the tracks out people were just saying ‘Hey guys we want to see this on the stage.’ And so it just grew so organically.”

Now they’ve spent a large portion of their time touring and promoting themselves. Unlike the rock n’ rollers of the 1970s, the Electric Revival do everything in DIY tradition, from booking the tour to recording their own albums.

“We’re three really good friends and it’s in my shop it’s really low stress and it’s super fun to make records that way,” said Dillon who has his own studio in Calgary, Electric Park. “It’s the way we’ve made all our records, so for us to maybe go into another studio would maybe be a little foreign to us.”

Many bands opt for recording their own albums thanks to the evolution of low cost technology that’s able to pump out high quality sound.

“We know how we want to sound and we don’t have to translate that to another engineer,” explained Dillon. “And by the time we’re done our pre-production we have a really good idea of what the sounds going to sound like and what we’re going to play so it’s super cool.”

This low production cost is important to indie bands like Electric Revival so they can invest more into producing hard copies of the album.

“We’ve been releasing vinyl and the new record’s coming out on vinyl. And vinyl’s great, I think from a business standpoint in an industry that’s suffering like music,” said Dillon. “It puts money in the hands of the artists again.”

Vinyl is also putting music in the hands of listeners again. In a world of digital files and downloads, the tangibility of the record appeals to many music lovers.

A local music fan who missed Electric Revival’s set, Kenny Klassen, 24, still bought their record. He says he’s more inclined to buy an indie band’s music if it’s available on vinyl, as opposed to a C.D.

“Plus it supports a touring band,” said Klassen.

The other aspect to vinyl is that even though the band didn’t draw a crowd, they were still able to walk into some of London’s local record shops earlier that day and sell them a few copies of their album. Seeing indie shops benefiting from record sales of indie bands is another great thing about vinyl said Dillon.

After the show, the band packed into their orange “mystery machine” style van, complete with a spare tire on the back with the band’s name printed on it 1970s-style font. Undeterred by the low turnout, Electric Revival will keep on keepin’ on in true rock n’ rolll style.

“It’s something that we really love to do and that we’d be doing together anyways,” said Dillon. “It’s super cool to have your two best friends and go on tours in Europe and all across the country and into the States, it’s super awesome.”

Bringing a big spark to London
Lifestyle Choices and Health Symposium: A healthier London and a happier softball team