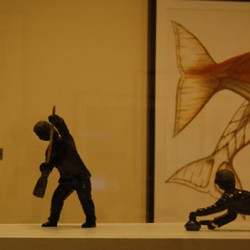 From Washington, D.C., to London, England to Museum London here in the Forest City, Inuit Ullumi: Inuit Today is both well-received and well-travelled, but will soon be on the move again.

The exhibition – which focuses on contemporary Inuit art – will be leaving London, Ont., later this month. Inuit Ullumi has been on display at Museum London since January and is part of a larger Inuit art collection owned by the TD Bank Group. The larger collection has pieces made between the 1960s and the present, but Inuit Ullumi focuses on pieces that date from the last 10 years.

Part of the reason the exhibition came to Museum London now is that 2014 is a special year for TD in London.

“(This year) marks 150 years of TD in London, Ont., and throughout the year that (anniversary) will be celebrated and we wanted to kick it off with something visual arts-related,” said Pamela Meredith, TD’s senior art curator.

But this exhibition is about more than just celebrating the bank’s history in London; it’s also a learning experience.

“People (in London) understand and are familiar with Inuit art, but with contemporary art in general it’s always good to educate audiences about what’s happening,” said Matt Thomas, marketing co-ordinator for Museum London.  “This exhibition does a great job of taking familiar items and putting a contemporary twist on them.” Meredith agrees that most Londoners are knowledgeable about Inuit art because of galleries here featuring Inuit art and Museum London’s permanent collection. But, she adds. this exhibition isn’t quite what people expect.

“The work that’s being made right now is a real combination of contemporary issues and traditional (methods),” Meredith said. “People think they know what Inuit art looks like and the subject matter. and I think the work in Inuit Ullumi really surprises them.”

One of the more surprising, and popular, pieces, according to Meredith, is a soapstone carving of a boy with a cigarette and an MP3 player.

While the contemporary subject matter may be surprising to some, the public has generally reacted positively towards this window into modern Inuit art.

“We had a great reaction in London (England) and so far we’ve had terrific reactions in London, Ont., because of the profile of Museum London in the city and this already existing appreciation of Inuit work,” said Meredith.

But it’s not just the public that appreciates Inuit Ullumi. Museum London was also pleased to host such a great exhibition.

“It had been shown around the world by the time (Museum London) got it here. It’s just a really good show and you’re seeing works you’d never get to experience together like this,” said Thomas. “Even though it’s a smaller exhibition it does a really great job.”

Anyone interested has until April 20 to visit this exhibition at Museum London.

The exhibition next heads to Toronto for the summer and then on to St. John’s, N.L.,  in the fall.

Suicide Girls – unlikely models who bare all
Wigglers and worms: One woman’s work with worm compost