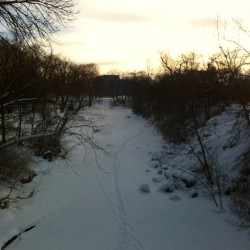 Canada geese, insect intelligence and urban forests are luring Londoners from their winter dens in droves to attend an ongoing series of nature talks.

The lecture series—titled Nature in the City—has been providing a break from the abnormally cold and snowy winter every Tuesday night since Jan. 14 at Wolf Performance Hall on Dundas Street in London. The talks, which have run every winter for the past nine years, are co-sponsored by Nature London and the London Public Library.

At a recent talk by Alison Lake, a naturalist from Pinery Provincial Park, stories about shrews and moles with feet like those of hobbits certainly kept the attention of the younger members of the audience. But the older folks in attendance looked to be jealous of Lake’s slides from a recent trip to Panama.

The topics vary from year to year based on which speakers are available and on public demand for talks focusing on certain areas.

But no matter the subject, the talks have one overarching goal.

“It’s an attempt to expose Londoners to nature in the city in the hopes that there will be an increased awareness of the importance of nature. Also, maybe getting people to think twice before we do away with any of the natural areas we have,” said Pat Tripp, chair of Nature London’s organizing committee.

The talks have been averaging more than 280 people per lecture and the most recent one was no different. Hundreds of people packed Wolf Hall to listen to Lake’s talk on small mammals.

Her presentation appeared to be well received and she seemed to have the audience eating out of her hand, so to speak. However, she was quick to point out that letting animals such as chipmunks eat out of your hand is actually a finable offence in Ontario parks.

The high turnout was not surprising to Tripp, who thinks the talks are having the desired effect. 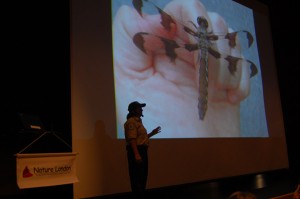 The Nature in the City lectures take place every Tuesday night at Wolf Performance Hall.
Photo by Ben Fraser

“We like to think that people are more sympathetic to the natural areas now,” Tripp said.

This sympathy extends beyond just those in attendance. Tripp finds that the municipal government in London is paying attention.

“Our advocacy is important and listened to most of the time,” Tripp said.

One member of London’s government who listens to groups like Nature London and is a fan of this series is city councillor Joni Baechler.

“I like the fact that the series keeps the topics of nature in mind and lets people who want to learn more about the city do so in the winter months,” she said.

Baechler has been on city council since 2000 and has seen a shift in general attitudes towards nature in London because of  a number of different factors.

“A number of decades ago, if there was a woodland, we would have just cut it down and made a subdivision, but now we’re far more sensitive,” she said. “I believe that our official plans reflect a society that is more sensitive to urban development in natural heritage areas.”

Although things have certainly changed on council during Baechler’s tenure, the balancing act between development and conservation will continue to play out.

“There’s always going to be a conflict between individual property rights and protection of natural heritage. These things are always competing,” she said.

And Nature London aims to continue educating residents of the Forest City about all the different types of wildlife living here in London through lectures like Nature in the City and other events throughout the year.

Nature in the City concludes Tuesday with a lecture on “backyard biodiversity” at 7:30 p.m. in Wolf Performance Hall.

Knitting: Not just your grandma’s hobby
ChicksCLIC will return in fall