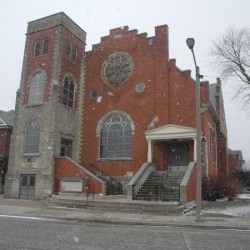 On the corner of Hyatt Avenue and Hamilton Road sits the 108-year-old Hyatt Avenue United Church. But the fading front sign and black metal fence erected across the entrance signal that the church has closed.

It is a church only in form, not in function.

Two blocks west of Hyatt Avenue, at Adelaide and Little Simcoe streets is a simple, two-storey building. It would blend in as a warehouse in an industrial zone. You have to look for the sign to see that it is actually the Impact Church. A flashy logo of a figure holding up its arms and a sign showing worship service times suggest activity.

The differences between those two church buildings are symbolic of wider church trends in London and Canada. The United Church of Canada, along with other mainline denominations, is shrinking as some of its churches close and memberships decline. At the opposite end are modern, evangelical churches such as Impact, which are expanding and thriving.

Today, the Hyatt Avenue church serves as a resource centre for the Middlesex Presbytery of the United Church. Inside the cavernous church sanctuary, a brilliant stained glass window beams in colourful light. There are rows of wooden pews and a shiny organ at the front.

The high ceiling of the sanctuary magnifies sound. “The acoustics in the sanctuary are one of the best in London for people who want to perform music,” said Don Coulbeck, a former member of the church who experienced Hyatt Avenue’s closure.

Coulbeck, 75, had been a member for 55 years. Much of his family history is wound into the church. His wife’s grandfather carved the ornate woodwork on the sanctuary ceiling. His children were baptized there. And he was married there. Decades ago, Hyatt Avenue was very active, Coulbeck explained.

“In most cases there were two or three generations going at the same time. We had the Scouts, Girl Guides, the Brownies,” he said.

But some of those youth groups were discontinued as trends changed. “As time went on, there were not enough children in the area to support Scouts. So Scouts was closed. We all got older and the younger generation didn’t fall in to come to church. That’s how our congregation’s numbers went down.”

The remaining members were mostly elderly. “We were probably down to between 30 and 50, depending on the day,” Coulbeck said.

A few years ago, the congregation decided to close. They held their last Sunday service on Dec. 26, 2010, according to a letter in The London Free Press that Coulbeck wrote. He said the last service was emotional, and some people cried.

“You’ve got so much invested in this and to see it close and drift it away, it’s very hard to take,” he said.

Though Hyatt Avenue hosts the resource centre, it is only a temporary solution, according to Rev. Cheryl-Ann Stadelbauer-Sampa, executive secretary of the London Conference of the United Church. “The Hyatt Avenue building is available for sale,” she said. “The hard part is that church buildings are not easily repurposed. They were designed to be worship and educational spaces.” Moving north up Richmond Street is a glimpse of Hyatt Avenue’s past and its possible future. The Robinson Memorial United Church on the corner of Richmond and Sherwood Avenue is also closed. It held its last service on October 31, 2010, as reported by The London Free Press’ James Reaney in a 2010 blog post.The Hyatt Avenue congregation decided to close down and move on.

But the members at Robinson Memorial closed the church and amalgamated with Colborne Street United Church.That church also absorbed the congregation of Empress United Church, which was located on Blackfriars Street before it closed. Rev.

David Carrothers, who leads the Colborne Street congregation, explained that “Empress was purchased by the owner of the London Lightning Basketball (who) was going to use that as a headquarters for his construction company.” Developer Vito Frijia made the purchase last year.

Inside Carrothers’ spacious office, a wide bookshelf is filled with books on the Bible, philosophy and religion. The smell of old books and wood fills the air. On a low cabinet behind his wooden desk sits a black coffee mug. White letters on the mug read, “Lord, what fools these mortals be!”

Carrothers explained that both Empress and Robinson Memorial faced the same challenges as Hyatt Avenue: “to try and maintain a building but without the vitality of the congregation. It was either a hold-on principle or a move-out principle, and move onto something new and that’s what both did,” he said.

The waning appeal of traditional, organized religion is one factor explaining church decline. In more vigorous times, Carrothers said that London had 29 United Churches. Today, that number has shrunk to 18, according to Nancy Hind, director of the Middlesex Presbytery.

Population trends also explain the decline. “A lot of the old churches are situated where we are, further downtown,” Carrothers said. “And until the next wave of gentrification happens, you don’t have young families around the downtown churches, they’re more on the periphery of the city, and that’s where the big box style of religion and commerce is happening.”

As for the Robinson Memorial building, it was sold to real estate developer Peter Grigoras in November 2010. He spoke at a public meeting held March 20 in the lounge of Robinson Memorial, where residents and city officials discussed the future of Sherwood Avenue after the church is converted into housing. Grigoras’ company, Romlex International Ltd., plans to develop the building into a 14-unit high-end condominium. The church that was once the centre of the community will become residents’ homes.

And it is expensive to bring something from the past into the present. “There aren’t too many good quality churches because of the age of the buildings,” Grigoras said. “I added over $300,000 in improvements and renovations.” Impact Church is in a former warehouse.
Photo by Blair McBride.

One step inside Impact Church shows how non-traditional, evangelical Christianity exists in a world apart from traditional churches. Through its front hallway, visitors walk past “Impact Café” painted on the wall and a coffee maker rests on a raised counter.

Impact could pass for any modern community centre.Pastor Karl Thomas, 51, explained that the building used to house a branch of Peterson Electronics.

When the company went out of business, Impact bought the space. That was 17 years ago. Since then, the congregation has grown to around 250 members.

Thomas wears jeans, a black sweater and has a short beard. In his office, a wide-screen computer sits on his desk and a Toronto Maple Leafs clock hangs on the wall. A row of superhero-themed PEZ candy dispensers are lined up on top of a cabinet.

Before moving to Adelaide, Impact was located on Grosvenor Street. They decided to open a new location in East London because “it was the most depressed and in-crisis area in town,” said Thomas. “We thought that we’d like to be there to help the crisis.”

Community outreach is a large part of the identity of Impact. Thomas explained the church’s activities include partnering with a food bank, conducting community meals at Impact, working with local social workers and buying Smart Boards and books for local schools.

“One year we just bought new knapsacks in September for all the kids in the area,” he said.

Unlike many traditional churches where a large part of the congregation is grey-haired, the average age of Impact members is between 20 and 35, Thomas said. “(But) we had a gal who died last year who was 102. So, very generational right across the board.” In Thomas’ judgment, what sets Impact apart from struggling churches is an openness to change. “Often there are whole paradigm shifts in culture that churches have to recognize,” he explained.

“If you’ve got a whole culture that doesn’t want to sing from a hymnal, (or) play a pipe organ, they would like to have something a little more happening – and you say ‘No way! Just the organ, just the hymnal!’ you’re going to have a lot of the community say ‘what’s the deal with that?’ ”

Impact’s sanctuary, which looks more like a huge recording studio with dozens of chairs, testifies to its urge to be modern. The musical instruments on the front stage resemble those of a rock band. And a large presentation screen is the backdrop. Coulbeck’s Christian tradition differs radically from Thomas’, but he concurs with the necessity for change.

“The United Church of Canada was slow to think about making changes,” he said. “About 15, 20 years ago places like North Park and that started cropping up and that’s where the young people were going. They were getting what they wanted – say, newer ministers, maybe a newer point of view.”

The future of the Hyatt Avenue building is uncertain. It could become a community centre or a condominium like Robinson Memorial, or an office, like Empress United Church.

In her role as a church leader, Stadelbauer-Sampa thinks it is time to recognize that the form of a church is secondary to its function. “We have been much preoccupied with our buildings,” she explained. “And maybe God is inviting us to be preoccupied with the gift of community and acting for justice in the world.”

Impact and Hyatt Avenue represent the contrasts between old and new, traditional and modern. But the two also recognize that a church is more than a building – it is a community.