The New Media class took a step away from electoral ward projects to pitch story ideas to two fantastic guests. Western journalism alumnus, currently with the CBC, Lauren O’Neil and the London Free Press’ Dan Brown took in a variety of multimedia pitches from groups in the class. A few projects overlap with municipal politics. […]

Continue Reading
By Janice Dickson on March 7, 2014 in Arts & Culture

In our New Media class we have been busy interviewing city councillors about the upcoming municipal election. I’ve been documenting everything that happens behind the scenes. Lately, I’ve heard from my classmates that it’s hard find locals to talk about their councillor. Sarah Rohoman and Asymina Kantorowicz ventured twice into Ward 3 but left empty […]

Continue Reading
By Janice Dickson on March 1, 2014 in A Day in the Life, Arts & Culture, Politics

John McKenna is the Executive Producer, Television News, of the Hamilton based television station, CHCH. McKenna stopped by the MAJ New Media class last week. He started the class discussion by showing television ratings among competing networks in the Toronto – Hamilton marketplace. Most of us were surprised to learn that CHCH typically ranks second, […] 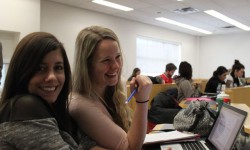 Welcome to the first post about our class’ coverage of the 2014 municipal election in London. My name is Janice Dickson and my partner is Alley Wilson. We are documenting the progress of our classmates and the way they cover local candidates. So what can you expect? Posts about interviews, photos, videos and what makes […]